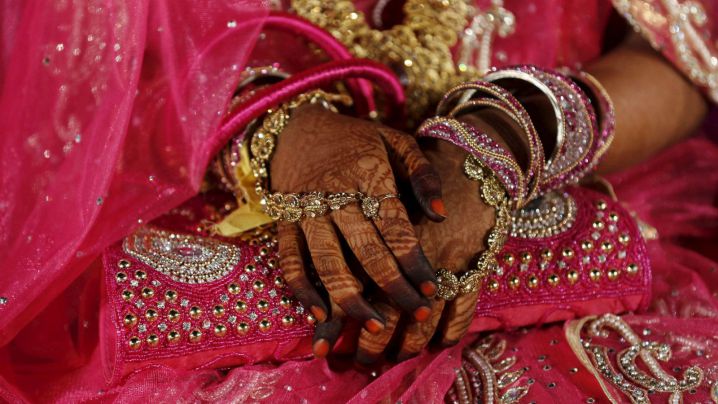 We all were very much happy that my elder brother, my best friend, my inspiration, most lovable person on this earth was getting married. All my family members including dad, mom, uncles, aunts, cousins everyone was dancing. I went all the way from Delhi to attend the same.

So the arrangements were perfect and the wedding ceremony happened as expected. It was a typical arranged marriage. Where both families met each other and saw the bride and groom and then both agreed to get married to each other.

After marriage she came into our family and she was trying to gel with everyone, on the second day at around 11 pm she went to the roof and was talking to someone. We thought she must be talking to her family, third day also the same thing happened and she used to talk late evening only. As a new family member my brother did not ask her anything. Finally on the third night he asked her who she had been talking to on the roof all alone. She replied angrily, "It's my cousin."

My flight was on 12th Feb but before that day something happened that actually made my life hell. After the fourth night in the morning she came to me crying and told me that there was a serious issue with my brother. I requested her to tell me what had happened with her and she finally told me that my brother was incapable. My eyes were full of tears, I did not know how to respond. How to ask my brother anything about this.

He taught me everything about life and today I didn't expect this from my brother. I immediately called her brother and told him what his sister was saying about my brother. If any doctor in this world could prove this I told him, I will be their slave for life, and in case my brother was fine then his sister must not be of good character.

Immediately her brother came to our place and my brother was not interested, he still went to the doctor and he was perfectly fine. Her brother (who is younger than her) slapped her and scolded her. He felt sorry about this and promised us that this will never happen. She went home with her brother.

After a few days both families decided as things were not good we could either mutually divorce or try to negotiate. In that meeting lots of discussion happened and finally the discussion turned into an argument and the argument became very serious.

That girl went to the police station and lodged an FIR against our family on grounds of dowry, mental harassment and against me she that I attempted rape on her. So the outcome was expected, the police came to my place and found me there. They arrested me and put me in jail as it was a non bailable offence.

My parents were at the advocate's place so the police could not reach them, otherwise all of us would be in jail. I was there in jail/so-called hell, the worst place on earth for five days and due to lack of evidence, I got bail in 5 days. All this seemed like a dream and nightmare both.

Police/Judge/Advocates/Doctors everyone knows who is right and who is wrong but still today also the case is still there and my family is suffering. All my family members are already broken. I have tried many times to fight back but today also I feel very low when the judge says "next date please".

This situation is so bad that my family and I are dying every day and every second. I think I'd rather die once than dying everyday.