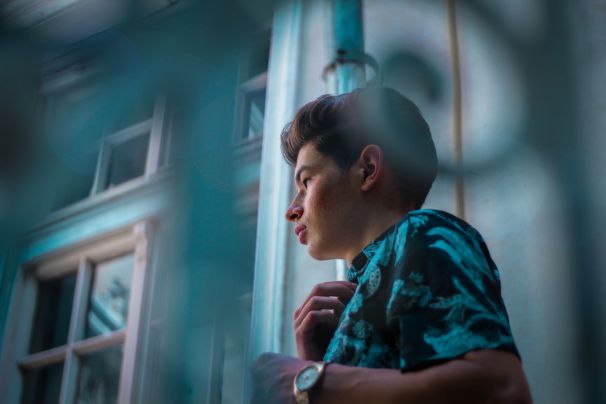 Each one of us in our lives would have gone through touching times, seen incidents, events which leave their imprints in our lives. This is a true incident about a friend of mine who lost his life after being hit by a fast local train about 17 years back.

Surinder, 21, was a normal guy- happy go lucky and fun to be with. We enjoyed his company, playing with his dog and loved to purposely tease him about his Nepali looks to make him angry. Initially they were 4 brothers and 1 sister, until his elder brother drowned in the sea many years back, and it was left to him to take care of the family then, being the eldest of the remaining siblings.

On that unfortunate day, he was coming back from his coaching classes along with one of his classmates, Rahul. Like many others who cross the railway track, they too decided to take the shorter route, not knowing that death was waiting for them on the other side of the tracks, not realizing that a fast train was approaching. They soon found themselves too close to the train. At that moment, both of them went blank, unable to decide whether to step back or jump forward to save their lives.

Suddenly, Rahul held Surinder’s hand, pulled him and jumped forward. Unfortunately, Surinder got hit on the head, his right leg got amputated and he died on the spot whereas Rahul managed to get past the train but the shock of what had just happened was so unbearable that he went into a coma. Both were taken to Bhagwati hospital and their respective families were contacted to give them the shocking news. Surinder’s younger brother was called by the police to identify his body and by this time, we all had come to know about the sudden demise of our dear friend.

While the family was in shock seeing his body and we mourned his death, one of our rich friends Vinay (name changed) and his (also rich) friends (local corporators' sons) had an idea- To feed dinner to 11 pandits and 100 beggars the next day as our mark of condolence to Surinder and pray for his soul. A bad idea according to me, as those guys thought themselves too smart to decide what should be done in such a sad time, and all that too against the customs and religion. Shouldn't Surinder's family be the one to decide how they bereave?

Next evening, the parking area next to Surinder’s building was cleared, halogens put, carpets spread and a table was laid on which stood a big photograph of our friend with a garland and flowers around while the caterers prepared the dinner in the garages behind. All of our friends, local people from the complex and watchmen had gathered. Many people shed a tear or two and left. By this time, Vinay could manage to get only 7 pandits but not even a single beggar came on knowing that it was offered as a condolence to the dead. The Pandits came, had a small prayer, enjoyed the dinner and went away.

But the food was remaining, that too for 100 people. Vinay and his friends had spent a lot of money on the caterers and the lighting. Now, what is to be done? Should the food be wasted? Money go down the drain? Of course NOT. On hearing their next horrible idea, I came back home and stood near my window.

I could see all my friends who had gathered to pay tribute to Surinder eat the remaining dinner that was meant for the beggars- a sad picture I was seeing that had a huge impact on me.

To this day I question the condolence meeting that evening, whether the friends really mourned Surinder’s death or celebrated it with a dinner party? Does anyone know the answer?