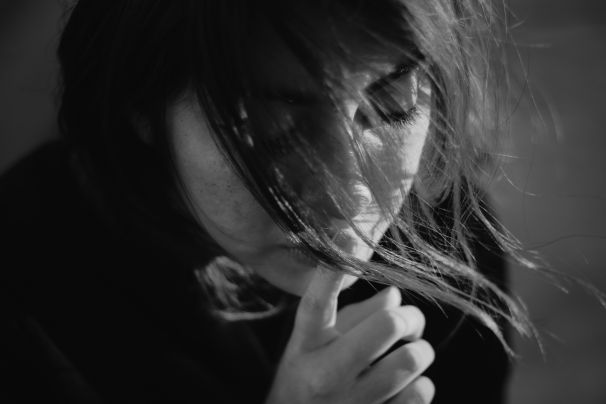 This isn't a "story". This is really happening. Even now, when you're reading this. So. Pay attention.

I've changed her name, but she's real. She could be... your neighbour? Let's call her Meenal.

Meenal has lived through an abusive and violent marriage for more than 18 years. Her elder daughter is of the age where she should understand what her mother is going through but Shanaya does not quite understand what her mother is facing. Shanaya has never seen a household where violence doesn’t exist, so she doesn't know that this isn't how daddy should be. I often wonder what goes on in that little head of hers. She's a teenager. When she's away at college, whom does she develop a crush on? Some entitled brute, I presume, and immediately block that thought. As I said, she's had a poor example of "man of the house".

She tries at times to help her mother but most of the beating happens when Shanaya and her sister go to school. In the gated community where Meenal lives, she has often been seen, begging or requesting her domestic help to stay back late, promising them extra money, so that her husband Atul does not beat her up. Meenal just doesn't want to be alone with her husband. She knows that having the help around lets her be safer.

Sometimes when the help is there, Atul, her husband, takes her into the room, locks the door and covers her mouth, beating her up mercilessly. Do you know what you have to pay if you're heard when you're being beaten up? What'll happen if you let out a tiny squeak? The price is probably within an inch of your life, but you don't know for sure when your mouth is stuffed with a hand-kerchief and you're gagging on it.

Meenal, on many occasions, is found bleeding from her wounds or comes out of the room crying. This serves two purposes for Atul - the help gets scared and quits her job, and Atul re-establishes power over his victim. The second thing that happens is Atul conveys very subtly to Meenal, that no matter what, there is no escape. Clearly, not all marriages are made in heaven Some are sentenced in hell.

Unfortunately for Meenal, the domestic workers don't work for long at her apartment and inevitably quit their jobs, as soon as they sense violence in the household. Atul is an expert at this. If he ever thinks of adding this "experience" on his LinkedIn profile, even I will recommend him for it. Ah, but I won't get carried away with sarcasm now. I'm still not done with Meenal's story.

These days Meenal is very troubled. Ever since the outbreak of the Corona Virus and quarantine measures during the lockdown, none of the domestic helpers is coming home. Atul isn't going to work. Life has become hell for her.

Atul doesn't have to worry about "outside people" any more. The kids are on their gadgets or watching TV. It has become so much easier for a husband to beat up a wife. Not having much to do has also made him very irritable. He is in an irritable frame of mind all the time and just uses that as an excuse to hit her. Meenal wakes up every morning, not knowing what lies ahead of her during the day. She tries to keep herself out of his way and is extra submissive. She tries to please him, all day long, hoping and praying that he doesn't lose his temper.

Meenal has never got support from her parents and thinks that all families have this kind of violence, and so has never really thought she can walk away. While the Corona Virus means infection for some and death for some, for Meenal it means - a small part of her dies every day, it means humiliation, it means injury, it means fear. She wants this virus pandemic to die down but not because she is concerned about her health, but because, Atul continues to stay home, Meenal will die many deaths every second, every minute and every hour of her living breathing life...

As you scroll down like you've read "just another thing", know that while Atul is keeping himself safe by being indoors today, Meenal is still thinking and fretting over preparing his next meal, and making sure no stone is unturned in providing him comfort. That's the level of generosity it takes to keep a virus outbreak from turning into a full-blown pandemic. Meenal is not a doctor or a soldier, but she's putting her life on the line for yours anyway.

I run Invisible Scars, where we help victims of abuse heal. Meenal is only one of the people I've met on this arduous journey. Both wives and husbands are victims of abuse, and I'm here to provide them with the support they need.

The hardest part is to identify abuse in a society that treats domestic violence lightly. But anyone can be of support. If you or anyone you know needs support for a case or instance of abuse, please reach out to the author immediately. I promise she will respond, and be with you every step of the way.

Queen of reinvention, opinionated, a fighter, street smart and a little bit crazy - that's me! Every chapter of my book is a small tale. The lessons you take away, depend on how you listen to my stories. I work to change the conditioning and behaviour that drive gender-based violence. I want everyone to live in such a way that they are conscious of the way they impact others. I believe that giving back to society is not only the ultimate exercise in democracy, but it is also the ultimate exercise for a happy and fulfilled life.