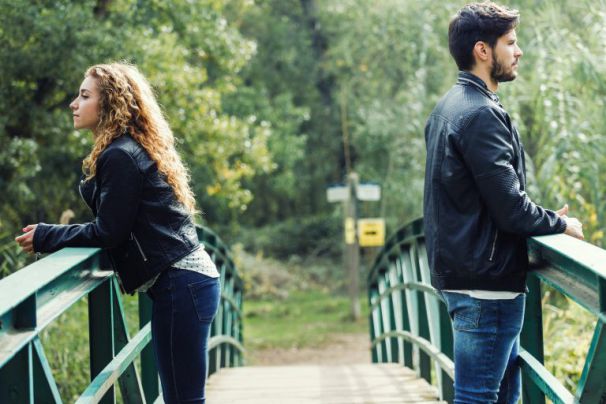 Advik had to let go of Jenny, the love of his life for five years now, because of his parents. They didn’t want him to marry someone who wasn’t from the same caste as them. Not only did they make him leave her, but they also forced him to marry someone of their choice, immediately. Giving him no time to repair his healing heart.

Naina couldn’t convince her parents that Imraan was the best companion she could have, for her and for her parents. And that society was wrong; societal norms shouldn’t matter when it comes to the compatibility of two people getting married. Naina was given no option but to marry someone whom they had chosen for her. His name was Advik.

They had a chance to meet once before their wedding was finalized. They hardly spoke on the phone during the period of their two-month courtship. The preparations had begun, but neither could prepare their aching hearts to understand this, let alone agree to it.

And before they could really stand bank on their feet, they became husband and wife.

Naina’s relatives were all praises for this match since Advik’s family was one of the most respected in their community.

Advik’s relatives were all praises for the lavish wedding arrangements that Naina’s family had arranged for the two ‘love birds’ and for the mountains of gifts that were handed to them.

This marriage was the talk of the town.

Once this event was over and normalcy started picking up the pace, that’s when reality kicked in: Naina and Advik were poles apart.

They tried to acknowledge the other’s presence, but all their efforts were in vain. They were two people, living under the same roof where compromises and adjustments were all that they had left in their lives. It’s not that they would always fight; it’s that they hardly spoke. Love and affection were a far cry from them.

Naina would miss the time she spent with Imraan, how she shared every little detail of her day with him. Not a day passed when she didn’t regret her decision of not fighting anymore for him.

Advik, on the other hand, would revisit how he used to buy gifts for Jenny, every single time they met. He loved making efforts to make every meeting of theirs special.

He knew that Naina wasn’t the reason of this marriage’s failure. He himself was, because he gave up. No matter how much he tried to be the loving and caring husband that he knew Naina deserved, he simply couldn’t, because they had nothing to share with each other.

No matter how much they tried, their hearts failed to entwine.

After a year and eight months into the relationship, they decided to part ways. While their parents couldn’t accept this fact, they believed that marriages are made in heaven and that it would be a sin to break it.

Their parents pressurized them to stay in this loveless marriage, on the pretext of societal norms and once again, society won.

Doesn’t this story seem like one that you’ve heard of before Doesn’t it make you sad? Or angry?

Unfortunately, many love stories have this ending.

Sadly, in our ‘modern’ 21st century life, this orthodox belief of ‘societal norms’ still holds more importance over an individual’s happiness. In one world, we are working with big MNC’s, achieving new heights and meeting people from all over the world, every single day. And in another, twisted parallel one, we are still bound by a baseless division of communities and religion.

Advik and Naina were forced to believe that marriages are made in heaven, but they actually couldn’t understand why it always had to be with someone from the same caste?

Could it be, that God was a racist? Or that racists have their own God?

Share this story, if you believe that it's time our society's old norms stop winning against love.