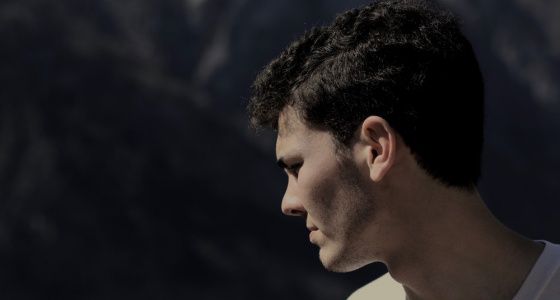 It was 15 Feb 2014, my first day at Lucknow Public College when I saw her. And like a romantic movie, I fell for her at the first impression.

She was wearing a purple color saree and was looking not less than a celebrity.

This was my first time outside Kashmir, and like any other Kashmir boy, I was afraid of situations that often happen with us outside the valley. So I ignored the feeling of my heart at that time and let it go. Not because I was insecure but since it was my first day.

After leaving for my classroom from the park, I wasn’t feeling good as I was worried about her.

I didn’t even know a single thing about – her name, residence, course, nothing and I needed to find answers.  As I was entering my classroom, I saw her again. It was like a miracle from Almighty for me. After that, I was satisfied that at least she was my classmate.

With time, things got changed and we came close to each other. We became best buddies.

I was very shy to girls and it built a wall between us. One day, there was practical lab assignment in the college where sir put me in their group. Being an outsider, I always feel something strange and left out. But these people helped me to eliminate the weird thought and welcomed me into their group. Our assignment lasted till two weeks and it brought us all close.

Her name was Maya, a Hindu girl and I was a Kashmiri Muslim. When I got to know this, I was shocked because I knew our religion would make things difficult for us. Her family was Brahmin and she was from Calcutta. I started losing hope but things didn’t go the way I thought.We became lovers with the help of one of our mutual friend, Sapna. She helped us a lot and made many efforts to bring us together.

Maya, from the starting, was worried about our future as she was thinking that her parents would never allow her to marry a Muslim boy.

But Sapna and I encouraged her that time had changed and the traditional inter caste-and-religion marriage thing was of the past.  We were now lovers and I was very happy. We loved each other very much. I met her every day, we got physical too. We even slept with each other many times. She used to live with her friend at her house in the old city and I often visited her there.

Eight months passed, we were very happy as our relationship was going awesome. We were planning to go home as our holidays were coming for two weeks following the semester end exams. My heart was not willing to go and her too, she called me nearly about 50 times that day. She told me that her father had come to take her home.

That evening, we both had our train from Charbagh railways station. Before our trains, we met outside the side station for about till 10-15 min. My train was late than her.

She was not happy as I didn’t see her smiling face.

At home, she did not call me much as we used to. In 13 days, she called me only about 10-12 times, that too for only 5-6 mins each time. When I reached Lucknow back, I saw her with her father. They had come to take her luggage back as her marriage was fixed by her parents. To horrify me, her engagement was just after 3 days.

On the evening, she sent me a text message and asked me to meet her.

I was excited as I was going to meet her after a long period of time.  I could easily imagine that she was there for her ‘sorry.’ She said that she was not able to refuse her father’s order. It shocked my whole body. I couldn’t eat even a dip of water that night and couldn’t sleep.

After telling her statement of facts, she hugged me tight and said, “I will miss you and I can’t live without you,” and with watery eyes, she left. I naturally felt that we would never meet again and this was our last.  I was dying as she was leaving college, me, friends, and Lucknow forever. I knew that we would never meet again as we had a distance of 2000 km with each other’s homeland.

After that, she never ever called me. I left the college too – only after 2 months after that, and moved away from the city.

I tried my best to search for her but could not. Then, I started studying law in Kashmir.

After 4 years, I have got admission at Calcutta University for my masters. Now I have hopes to see her again.

I am writing this after watching Baagi 2 movies as their marriage also took place 4 years ago, and finally met.

Share this story, if you are a Bollywood fan. Because Bollywood has its own charm to inspire hope in people.

Shahid Ahmad Padder a resident of South Kashmir . A valley where peace was born and Which is considered as Heaven on Earth