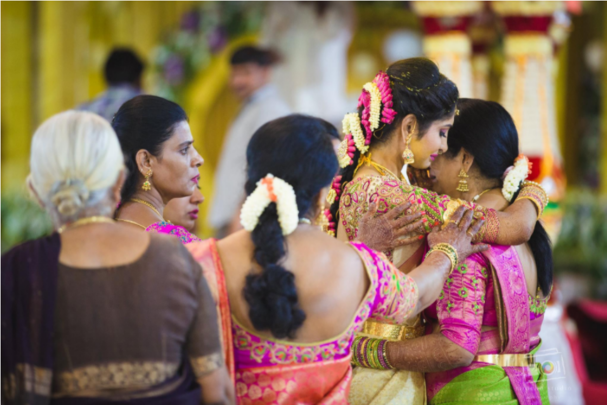 I believe that in this whole world, there isn't a bond that is stronger than the one between sisters. I have an older sister who is sweet, simple, and innocent. And I'm exactly the opposite because I'm mischevious and stubborn.

My sister is a big part of my life, and being without her is heartbreaking. She was my model and my idol, and I really love her. She looks out for me for every small thing.

But we grew up, and my parents started searching for a groom to get her married off. They were looking for the perfect man, and the idea of having a jiju was kind of cool. But it wasn't as cool as I imagined it would be.

My parents finally found the perfect match for her. She was very happy, and we were all excited that she was happy.

My sister's dream wedding was planned for a few months later. As she left us, I was in deep pain. Somewhere, I had lost my support, but I was still very happy for her. But we were totally unaware of the danger she was going face at her in-laws' home.

She got into that house, and slowly she realized that her dreams were completely useless. They were never going to be fulfilled because those people were not as good as they appeared to be. My jiju was nice, but he had no power against his mother.

Her mother-in-law turned out to be a psycho who tortures her for no reason. She would yell at her and scare her, sometimes she would force her to do things she couldn't or didn't want to do. My sister, being the sweet girl that she is, tried to adjust and brushed it under the carpet.

But one day, her mother-in-law crossed all limits, and my sister finally spoke to my parents about it. She was harassing her verbally and had convinced my jiju that she wasn't a good person. She was making her look like a thief when there was missing money and questioned her upbringing.

That was the last straw for my sister. She had hidden all this from my parents because she didn't want them to be heartbroken. But when her upbringing was questioned, she couldn't stop herself. She called up my father and told him everything.

That day, I realized that a marriage is not between a man and his wife. It was in between a lost young woman, and a huge incompatible family. But I've seen my sister in so much pain that I have stopped believing in marriage altogether.

Share this story because it's clear that a girl child gets no support after marriage and it's time that we change this as a society.