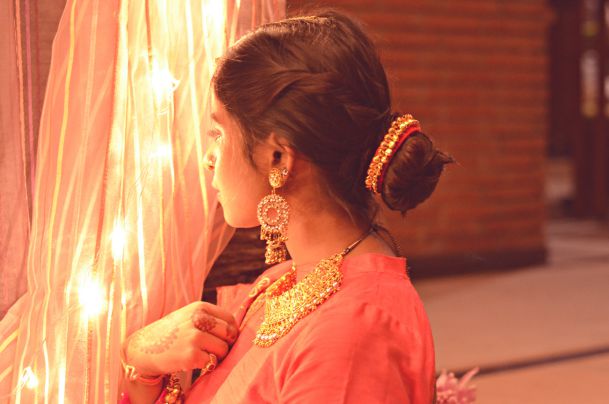 FAITH: A word that brings positivity, hope and belief along with itself.

Little did I know that there exist people who make an attempt to change one’s FATE in the name of FAITH! It was the end of 2012, when my parents said, they were going to start searching for a guy for me as these days it takes too long to find someone.

Although I am not a big supporter of the concept of arranged marriages, I was not totally against it either. At the same time, my mom consulted an astrologer who said I was “Manglik”. Since it was an important factor considered in an Indian marriage, we were asked to perform certain rituals to reduce its effects on my life.

I was reluctant to undergo the process. I am not an atheist but I don’t support such rituals that are particularly done only “for the sake of making things happen”.

Will this really change my FATE? Wouldn’t just faith in God and prayers bring good fate to me? I couldn’t argue much with my parents, and so I agreed.

Simultaneously, my parents decided to put a word across to our relatives and friends to find a suitable match for me. My family belongs to the upper middle class in Mumbai. My family and relatives consist mostly of well educated people and we wished to find someone from a similar family background. Few profiles started pouring in but nothing really fit. Since 2013 was a busy year for us, the search was moving at a slow pace.

However, in 2014, my parents got serious and started making immense efforts to hunt for a groom for me. I was least bothered since I hadn’t met anyone in the past one year and it didn’t really bother me.

My mom was now getting anxious and felt some problem still persisted in me as we could not find a groom for more than a year now. She solely, for the sake of my marriage, started consulting other pundits and did a lot of different things on a daily basis so that my marriage could come through.

Eventually we used to argue because she wanted to follow everything that was suggested. I was unhappy as I felt that money was being wasted in the name of GOD and people were taking my mom’s emotions, faith and fear, for granted.

I am a person who would never say “NO” to parents. Hence, I did everything she wanted me to do but only after making several attempts of stopping them. At least I would feel content of not giving up so easily. The SAGA had begun.

I was made to marry “Lord Vishnu”, wear different gem stones, fast for a particular day for certain number of days. Solely for my parents' peace of mind, I went through all of this. I did everything against my will, only with little hope that may be some day this will end. But it didn’t. I kept meeting guys but nothing turned out in our favour, more over I was getting frustrated each day.

I realized soon enough that destiny plays an important role in one’s life! I wasn’t a firm believer until I went through this phase. All I wanted was peace of mind and a logical reason for what was going wrong. I started hating these pundits and if it were left to me, I would sue them.

I could completely understand my mom’s plight, as any mother would go out of her way to make things happen for her child. No amount of words would change her mind and I had to give up each time.

This insanity was taking a toll on my mind, my career and the change in my behaviour was making it difficult for me to maintain relations with people around me.

I was completely fine with the delay in my marriage but I didn’t want me and my family to be in any kind of stress over my marriage! However, I had decided not to carry out any rituals in 2016 and I wanted to stick to my decision, much against my parents' wishes. Earlier, I had chosen my parents' will, now I didn't want to anymore.

I call them “horoscope trials” just like we have Clinical trials taking place in the world, where I am being put on different drugs (here rituals) based on the mere understanding of those pundits who could never give me logical reasons for their suggestions. Apparently these people had gained knowledge from their forefathers, reading or such trials and errors.

I am not against the idea of astrology. Astrology, in fact is really interesting if anyone can logically give its significance or reasoning for any problem. Only a learned person can explain it well and not just any layman. I was furious when someone suggested that I had lost the attraction power within me and it could be restored by wearing red attire.

And when I meet a guy I was supposed to wear red compulsorily. Was this the only thing left to do? I was told further that if I wear red on Tuesdays and most other days too, things will be fine and I will find a groom soon.

But I HATE RED unless it’s bridal wear! He had a solution for this too, I was asked to wear “Red Lingerie”.

My rage knew no bounds that day! I hated it. Everything seemed to be going out of control and there was nothing I could do. As always, I had to choose my mom’s will. One thing I learnt was to try hard and find positivity in any situation. Here I had to find positivity and happiness in SHOPPING!

Finally 2016 ended and I lost one more year of not being able to get married. What I hated most was, each person was able to give me different reasons and suggestions for my 'ill fate' of not finding the right match.

I always wondered, how can the reasoning differ so much from person to person and each one of those astrologers would point out mistakes of others stating everything done till that point was incorrect. It would be perfectly fine if they were not able to give logical reasons and if they could just be honest, rather than finding a way to make money by giving illogical suggestions.

Meanwhile, one of my friends asked me to visit a lady who was well educated and qualified to study horoscopes to explain things logically. Since my friend gave me a positive feedback, I decided to meet the lady once.

To my surprise, this lady told us, that until now whatever rituals we had carried out weren’t required at the first place. Yes, I am Manglik but all these years what we did were not only wrong but had enhanced the effects of Mangal dosh instead of reducing its effects. She suggested to not practice those any further and automatically things will fall in place. "Just have faith in GOD," she said.

My mom and I were in complete shock. I felt as if my life was ruined because of the past three years. I broke down like never before and was in trance.

I felt helpless, and broken from within. I lacked confidence and was losing hope because I was unsure if I could trust one more person, but my conscience told me to trust and I did. Today, I feel we are so immersed in the pool of Horoscopes that my identity has been left only to the “Horoscope and Marriage”.

It's the beginning of 2017 and I just pray to God that since I have been holding up for a long time now, let me not break now. Guide me and direct me in the right direction, make me strong because I can no longer go through new trials.

Till date, I have been hopelessly wishing for some miracle to happen, where things will fall into place. My fate will change. I have faith in God and hope I won't get disappointed this time.

Share this story because there's a difference between faith and life-ruining faith.