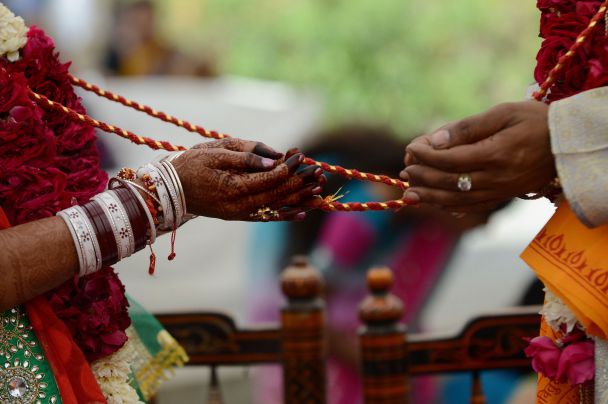 So, I had a bad marriage which didn't go well right from day one. I had to take a decision of saying goodbye to it as it was quite a baggage that I didn't want to carry with me for life.

The community that I belong to considered divorce as a taboo. Something that they aren't used to seeing people go through. But I went ahead and applied for divorce anyway.

It has been one of the best decisions of my life. Here's to all those women and men struggling in an unhappy marriage, chained to stick to it. Here's to an ever assuming society that boxes divorces and the ones who go through it.

I asked five people belonging to different age groups for their take on divorce and this is what they had to say:

A 30-year-old-lady told me this: “Divorce? Hmmm Divorce means freedom.”

A 50-year-old-lady said, “Divorce is pain… it is hard to accept life after this.”

A 70-year-old man said, “It’s bad.. Against our culture… the girl should know how to adjust…having a kid will solve all problems.”

A 14-year-old boy said this: “I don’t know. What does this mean? Something like love?”

When I took this decision during my first marriage, needless to say my parents were in for a shock. They could not come to terms with it. Especially with something like this happening to their daughter.

I come from a rather narrow minded community and the word divorce isn’t accepted too well. Let me narrate an example. During my single days, I found weddings to be a great way to get free food and also observe a lot of people around plus the gossips. It still feels like yesterday, this was in 2009 – my aunt and another family friend were talking about a girl who was going through a divorce and believe me when I say that none of what they spoke gave me a good impression about that girl. I was so taken aback by their talks that at some point I believed that she had made a mistake by filing for a divorce.

When she came for one of the functions, my entire community treated her like she had battled a life threatening disease or even worse, lost a loved one. People were giving her condolence speeches and I did not know what could be going inside her head listening to so many people judging her decision.

When I made up my mind about this, I sort of knew what I was getting into. Let me tell you the good thing, my parents were brilliantly supportive about this because they knew what I had been through and they knew I gave it a genuine try before I decided to call it quits. I did not tell anybody else, not because I was going through a tough time or did not want to feel ashamed but because I wanted to avoid the drama. I, for one can be too honest most of the times and for their own benefit, decided to not tell anyone.

When someone you know is going through a divorce, please do not assume there could be an extra marital sex or a cheating partner behind it. It takes one reason for a marriage to work but one hundred for it not to work. Each couple goes through a different reason. Some cliché and some not so cliché. Do not judge them by that. A divorce doesn’t makes them any different from the millions of married couples around.

Just because someone wants to move out of their wed-lock and start afresh does not make them bad people. Maybe they found someone else who they love and they want to let go of the misery they are causing to themselves and the partner. Maybe they found out that marriage is not something they like to be a part of. Maybe they are sexually not happy. Maybe she snores, maybe his d*** is small.

It could be silly or big. Who are you to judge? It is their story, not yours. You were not a part of their tough days and you have no right to comment on their decision or should I say assume their reasons for divorce.

It is not easy going through a break-up, especially when there are families and laws involved and in some cases, a kid too. It is so hard to put up a smile at your work place and still go through this every day. I still remember the day when I filed for mine, I took half a day permission from work as I had a meeting post lunch and my director from China was visiting us during that time. When I told him it's personal emergency, he did not have this in mind. I’m not making it look casual but then that’s how most of us are forced to deal with this.

We do not have the luxury to sit and cry in a corner and mourn for a week. We still have our bills to pay and life has to move on.

This story is not about telling those who are dealing with it how to deal with it, you are your best judge. You know what works best for you so i’m not going to preach unto how to cope up with it but I’m going to tell you only one thing, do not feel guilty and do not regret.

Once the person goes through a divorce and comes out alive from all the mental hassles, the next phase starts. “How are you going to live your life?” is the question people will ask themselves about you and some from you. If someone asks this the next time, just turn back and answer, “Which of my bills are you paying this month?” and they will shut up. Because those who will be willing to pay your bills won’t ask such stupid questions.

When I came out of my first marriage and led a single life, I remember being my happiest self during those times. The word freedom came alive to me. I only had time for myself and nobody else and I felt absolutely awesome about it. It is okay to feel this, you do not become selfish by thinking about yourself, you only become true to yourself by doing so, so do not feel ashamed, go ahead and fall in love with yourself.

Post this is the phase where people around you confuse you of who you are. What status you are at in life. They track your movements more closely, it's like someone is always spying on you. Don’t worry, it is normal in India. When I was going through my divorce, I had quite a few people calling and messaging me telling me how "everything is going to be okay" and I used to read them and laugh as I was sitting at TGIF and tell myself, “What do you mean okay? Everything is brilliant mate.”

I remember posting a status on Facebook a month later saying, “Stop sending me condolences messages, I’m not dead yet.”