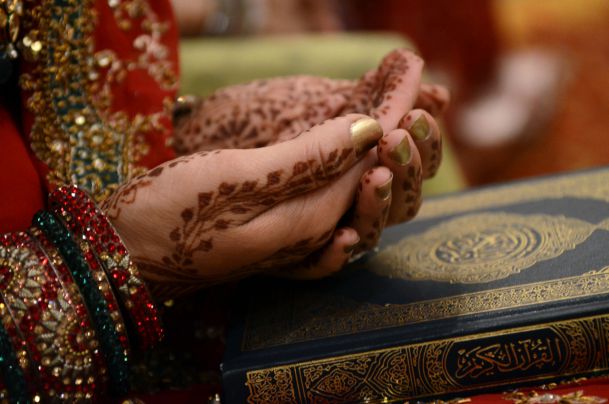 I was happily working in an MNC and my job was going good too, I was expecting a promotion in the near future, well sometimes things really don't go well when destiny has to play itself. I got this marriage proposal after a festival of ours "Bakrid", yes I am a Muslim and a proud Indian Muslim.

Engagement was fixed on a date just 3 weeks later. No I didn't meet the guy, I didn't speak with him.

A month after the engagement, my marriage was fixed. I hadn't spoken with him yet. We did exchange numbers but he didn't call or message till after half a month. Yes it was just 15 days to our marriage and I was to decide after talking to him that he is the one. He was the guy I would be spending the rest of my life with.

The talks were weird. The second day of exchanging messaged he asked me about family planning. When I asked him if he had an attached bathroom in the room, he said, "No, will your dad build one for you?" When i shared this incident with my parents, they blamed me for asking such a question. "Why did you have to open your big mouth to ask all these things?" they said. It was a house I was going to live in but I was not allowed to ask anything.

Later he asked me where I wanted to go for my honeymoon and when I named my dream destination, he said, "Why don't we start with locally discovering Bangalore?" I pleaded my parents to stop the marriage. I knew that he was not the right one, but obviously the more important thing was, "Cards bat chuke hai beta." (Cards have been distributed). No one heard heard me.

I pleaded and begged, my mother said that she'd do something if I broke the marriage. Out of the fear of losing her, I kept shut. I got married somehow and it only got worse from there.

He use to have sex with me 6 times in one night. I wondered if I really made the right choice. I felt like a dummy doll. There were no windows in the room, no attached bathroom, I was stuck in the worst situation. I could only talk about this with myself. He didn't spare me even when I was pregnant. I had a miscarriage, credit goes to him.

2 months passed like that, I was tortured mentally. My phone was taken away from me and I wasn't allowed to visit my parents till my father-in-law gave me permission. They made me quit my job. This was because of my parents, for the respect i had for them. I compromised on my job, my phone, my parents.

Being awake at night for him was usual chatting on the phone. He had girlfriends, which I found out about later by checking his phone. The chats were dirty, he basically needed sex in his life, constantly.

One day I just confronted him and all he said was, "ultimately what will you do?" and I threw papers on his face and said, "I need a khula (divorce)". With that my life's precious 6 months were wasted but the freedom I got was nothing like ever before.

I just wish my parents had trusted my words before so that I didn't have to go through this torture. They say good things happen to good people, and I am glad Allah helped me come out of this hell. All my prayers were answered finally.

My Namaz helped me to come out of my bad marriage, which seemed impossible. To all the ladies suffering from a similar situation, stand for yourself because no one else will and listen to your gut, it'll never lie to you.

It's a shame that such practices are still on and accepted in our society, share this story to tell our elders how they may be ruining lives because of their beliefs.

YOUR STORY
BAKKAR. CHAI. SUTTA
Your Stories
LIFE IN THE TIMES OF CORONA
SINGLE WOMEN BAD WOMEN
The Golden Bird