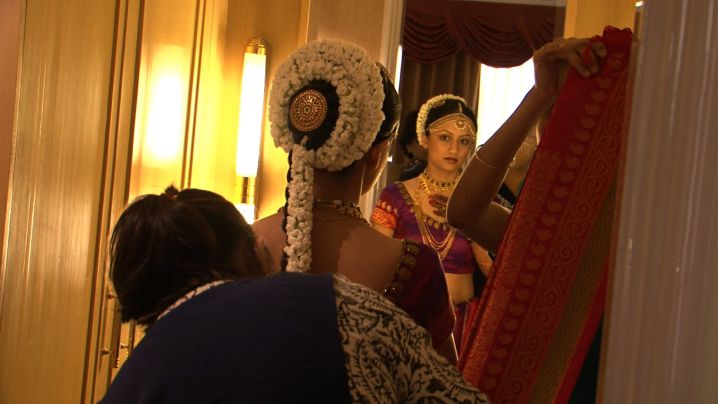 Some say marriages are made in heaven. Sorry, but I never believed in such crap. Past 29 years of my life, I had lived like a free bird. But now the D day was close and my stomach was full of jitters. My marriage was about to be fixed. But, that's not the whole story.

My in-laws came to my house for the first time to see me. I am sure every Indian girl hates this nautanki of sitting ready at home, waiting for the guy and his king and queen parents to come home to give your face the approval. Once they do come to your place, you take a tray of snacks and tea and place it in front of the old couple looking at you like hawks. I did all of this and then sat down waiting to be bombarded with nonsensical questions. They came like a flood. This was the day that forced me to believe that the ancient logic of Indian arranged marriages has failed to live gloriously through modern times.

Thoughts buzzed in my mind angrily, “Are you looking for a cook, or a life partner for your son?”

The son sits and listens politely while his father starts with a tirade of questions,

Heaven knows I bow my head in a desperate attempt to hide the fear of getting married into this family. Sasurji continues, “Office ka tension ghar me nahi lana.”

“I don’t want ego problems from your end.”

I finally raise my head to look at the guy I am supposed to get married to. I wanted to see his reaction to this. What the hell, his face is nonplussed. Horribly, I realize he thinks his father’s words are to be abided by.

Instead of saying anything I keep quiet because that is what my parents had taught me to do. "Shut up and let us handle". So I stayed shut, while kicking myself in my head.

His mother asks, “So you have a flat. Who pays the EMI? How much do you earn?”

My mind was numb by then. I am supposed to be an IT engineer who is a Manager in office, but who can’t open up her heart to her 'so-called' would-be family. Somehow, I noticed that the guy was nice, even though his parents were getting us married because my father was richer than them.

Don’t I have a life? Don’t I have to go to office? Should I put a camera in your house to know every whim of yours?

She called me and vented out her anger saying, “You are not giving me importance, now, before marriage, what will you do later on?” I felt as if, my life had already ended.

I recited this entire situation to the son, on whatsapp (God bless whatsapp, I could write without wondering about his reaction or his facial expressions or his sighs).

Next Sunday, mother-in-law and son both came to my home and mother-in-law came out of her shell. She started by saying, “I didn’t like the following two things at the engagement function. I don’t want you to go to your mother’s house after marriage, unless I give you express permission. My son gives me his salary, why shouldn’t you? You have to wake up at 5 am and make roti and sabji every day, then after office you have to cook in evening. Weekends you will do jhadu, pocha, bartan everything.”

In other words, she was hiring me as a house help.

I understood that my mother-in-law was smart, she was getting a maid who will give her salary (not take salary) at every month's end. My parents were too dumbstruck to say anything. I kept quiet, because my fiancé kept quiet during his mother’s rant.

She left after keeping all her demands in front of us, I got into a frenzy and then started listening to old 60s and 70s sad songs and finally got into initial phases of depression. My life had ended. My freedom and my independence, all gone in a whoop. The balloon of happiness, of decision making, of being a bird, everything finished, just because my mother-in-law wanted to keep me under her control.

I wanted to really ask this question from everybody out there, especially to guys: When a working girl gets married, she brings in her salary, her ability to become a mother, she works in your house even after coming back from office, and in my case I even have a house of my own. What do guys bring in to the marriage? What? You guys go to office and come home and just sit and get served, either from your mother or your poor wife.

A husband loves the wife, well wife loves him back.  (nullified)

He could have given me a home, I already have it, so I didn’t expect that from him. (1 point for me)

On top of this, I will bear his child, I'll be a mother whether I want to be or not. (another point for me)

So what is so special about a guy that I must leave my home, my comfort zone, my entire life, my family, my parents, my identity, everything so that I can go and slog day and night like a maid, on weekdays and weekends cooking for them, WHY? Who gives in-laws the right to change an innocent girl's life to such an extent? Why should in-laws decide how I will live. Can habits of 29 years get changed so easily? Should they have to be changed?

If yes, why are all the sacrifices only made by the girl?

But, I can't thank that woman enough for showing her true colours before I got into this madness. So, thank you MIL.

If anybody has an answer to my questions I would really like to know. But one thing is true: Only a woman can screw a woman. If my mother-in-law had not turned on me after my engagement, I was really on the way of treating her with love and care and pampering her. I believe she split and ruined our relationship even before it began.

This is objectification of women practiced since ages in our society and if you don't want your daughter to go through the same, share this fine lady's story.