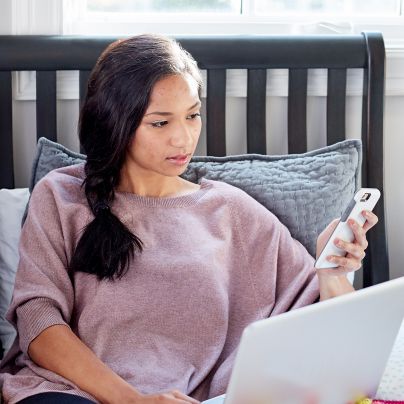 I am a Maharashtrian girl. I was born and brought up in the city of dreams, Mumbai. I did my MBA from a reputed institute and started working soon after I finished my course. I had to leave the organization after a few months because I had some health issues. After I recovered I started looking out for another job.

One of my friends introduced me to her friend, Ayush (I have changed his name here). He was a north Indian and belonged to a Marwari family. My friend said he could help me find a better job. She gave me his number. I called him up the next morning.

I told him that I was looking for a job and asked him if he could help me. He happily agreed to help me. This is how it all started. Initially, we talked very formally with each other. Our conversation was limited to my job search alone. He asked me to use better CV templates so that I could improve my chances of getting a good job. After a few days, I was called for an interview with a well known IT company. I landed a job there and started working again.This time I knew I had got a good job. I had even found a good friend in Ayush.

I didn’t want to fall for him because I had recently been through a breakup. I was finding it very difficult to trust anyone again. But I guess Destiny always has something else in store for us.

Ayush confessed his feelings for me. He insisted that his family would accept me. We shared each and everything with each other. We both started developing feelings for each other.

According to him, his parents had a modern approach to life. He was sure that his parents would happily accept me as their daughter-in-law if I agreed to marry him.

He said that his elder brother too had opted for a love marriage so he was sure he could marry me. He thought we were made for each other. One fine day, Ayush showed one of my pictures to his mother without asking me. He said that his mother had liked me. He asked me to tell my parents about him.

But I was still not sure about him. So I decided to tell my parents about us after some time.

Ayush and I loved being in each other’s company. We went out for movies, lunch, dinner etc. I felt he loved me unconditionally. I knew he would do anything for me. He did not propose to me but I was not looking for a proposal either. We knew we wanted to be with each other in the future too.

I love it when it rains (especially Mumbai ki baarish) but Ayush did not like the rainy weather. Well, since it started raining, we decided that there was no point going to Marine Drive now. So we decided to take a long drive. When it stopped raining, we got down from our cab to see the Prabhadevi beach near Bandra Worli Sea Link.

We walked near the beach and somehow everything seemed to be perfect that day. I did not want that day to end.

We then had our dinner and went to our respective homes. We continued talking to each other for hours after we returned home from the office. We often talked about our future too.

I could be myself with Ayush. He really liked me the way I was. He would always listen to me patiently even when we made fun of each other. I felt as if I had got a best friend who would go on to become my life partner in the future. We were happy with each other.

I never thought that this could happen to me. But it did because it was meant to happen. One evening, Ayush called me and told me that he was getting married next year to a girl of his parents’ choice. Before I could speak, he continued with what he wanted to say.

He told me that his mother did not like me. He said we should stop thinking about each other but he said we could still continue being best friends.

I was shattered to hear him say this. I wanted to ask him lots of questions but I just didn’t know what to say. I felt numb. But I gathered my courage and said, “You told me that your mother liked me! What happened suddenly?” Ayush said, “Yes, she liked you based on your picture but I told her that you belonged to a different community. She was OK with even this. But she asked me about your caste. I told her that you were a /Dalit.”

I said, "How does that matter? Is she rejecting me because of my caste? I am a well-educated, independent girl who was born and brought up in a metropolitan city. All my family members are well-educated. I am working in a reputed IT company and I am earning well too. So, how does caste matter?”

“You told me that your bhabhi too is from another community. But your mother accepted her. Then why does she have a problem accepting me?" I could feel a strange lump in my throat now. Ayush said, “My bhabhi is a Kshatriya. So she accepted her. I asked my mom to meet you and then decide. But she didn’t agree. She says, “Jab karna hi nahi hai, to milu kyu usse?” I have been trying to convince my mother to at least meet you once. But she is not ready to accept my suggestion.”

I said, “You are telling this to me now. I am involved in this too. Why didn’t you discuss this with me before you talked to your mother?”

I was so hurt by all this that I could barely speak. I just disconnected the call.

I didn’t talk to him for days. He tried calling me. But I ignored all his calls. He texted me but I didn’t reply. So he started sending me emails.

I had always loved Ayush for doing all these small things for me. Only he could mail me with a subject line which said, “I am sorry. Please call me??” I finally called him up.

He said, “I am sorry. I really feel guilty for doing all this to you. But I cannot go against my parents. They have done a lot for me. I would have married you but I can’t go against my family.” I just said, “OK” and disconnected the call.

Over the next few days, he met several other girls. He is finally getting married. He says he is happy because the girl his parents selected for him liked him and he too liked her. That was the day I felt like asking him a few questions.

I wanted to know what I meant to him. I knew I was just an option for him all this while because he was not getting any attention from other girls out there. I then wondered why he had done this to me.

I came up with my own answers after a while. Some people think that if they wear western clothes, they will automatically have a western approach. Ayush’s mother has a great sense of fashion. But her thinking remains conservative. Sadly, our society cannot develop because of such people.

What was my fault? Just that I belonged to a low caste? I am an independent girl who is mature enough to take her own decisions. I can take a stand for myself. I would have accepted her rejection if she had disliked my nature. No, she had no issues with that. She rejected me because of my caste.

We cannot change the external world. Period. Often we cannot even change others. But it’s strange that ‘rejection’ makes us look at the entire experience with a negative lens. Suddenly all the good times and the good traits of a person pale into insignificance. We are hurt and it hurts – a lot.  So it is quite natural for our perceptions to be flawed too. Do share this story because some distant day, we realize that some things were perhaps just meant to happen.