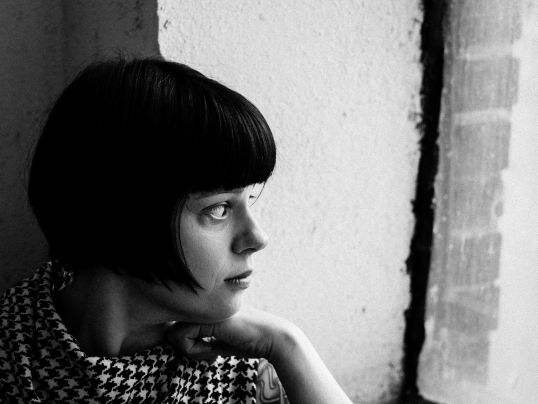 Nice, beautiful day it was. Unlike the other days of the south Asian weather when it is either too hot to go out or too mild to be willing to go out. No! It would certainly turn out to be a mistake. Spending the day outdoors would only mean she would come home inhaling nothing but dust. She would rather stay at home and share love with her bed and her half-finished novel The Price of Salt. But before that, she once again tried to leave this world and go back to her dreamland.

"Santia mukarosso yey. Belchino tukorasa. Faalinda sutocamo. Farayi satameyo. Belchilno tukorasa yey." And it went on. The dreadful device always came in between her "world" and the real "world". It wasn't her birthday, it wasn't her parents' anniversary and this sent an alarm ringing to her brain. It couldn't be good news. For good news there was WhatsApp, Facebook, Twitter and the Lord knows what not. Calls are acceptable only to transport excitement felt throughout miseries. Before she could say "hello", the voice from the other end of the line said "Oh dear! It’s dreadful news! Ria's fiance isn't there anymore"

And went on a detailed description of how he died.

"What happened?" asked her mother who just came out of the bathroom, her hair wrapped in the towel for the water to drain.

Instead of repeating the details, she handed over the phone to her. For she found herself feel awkward in such situations where she couldn't find the right words to say. She wondered what she should be saying to Ria to ease her.

Amidst this, she discovered that she was more worried about herself than Ria. She went to her bed to "think" for what can be a better place to think without having to panic than a bed? Why doesn't she feel miserable when her best friend is in such agony. She examined again and this time again she cannot feel sadness.

It was two years ago when Ria lost her brother in Dimapur. Although a suicide note was found in the hotel room where he checked in, her parents believed he must have been murdered. Their son was their only hope to bring them out of their financial downfall. They sold their house and all their jewellery. Soon after that, Ria's husband left her for another woman.

I saw the same confusion in Ria's suffering. The dead body arrived at 5 pm. When the news arrived I found her feeling guilty. I saw her. Trying so hard, yet tears wouldn't follow. Perhaps just as her emotions, Ria's tears are too tired.

Some said that it was Ria who was the real reason behind everything that is happening in her life. That she is "kalmuhi".

She brings sorrows wherever she goes. Her mother, however, believed in a different story. When Ria had her first period, her step-grandfather who followed the Vaishnav cult wanted the first drops of blood from Ria's first period. Many "things" were promised in return for the blood to the parents. But of course, the other Vaishnavs believed those were just stories pickled with the help of superstitious spices and bottled together with rumours to prevent their daughter from being burned alive or made to walk naked through the village if other stories come up with her involvement with a witch.

Whether this is fiction or inspired by real events, it's entirely true that there is still a section of the society that follows strange rituals and makes a habit of blaming women for any tragic event. Share this story so that we may put a stop to these ghastly superstitions.