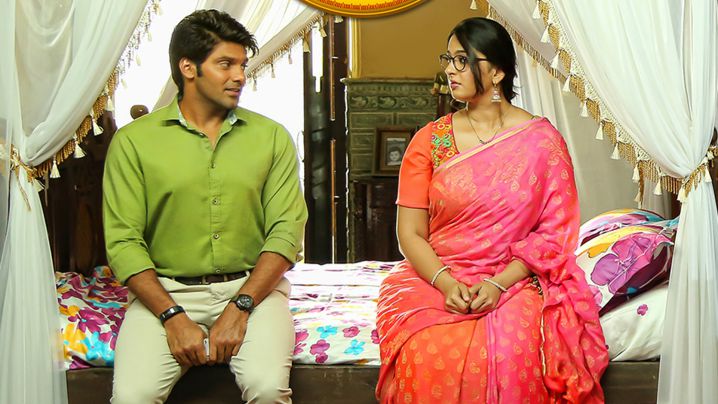 ‘Objects in the mirror are closer than they appear.’

To decipher something out of this, is getting difficult for her parents. The mirror is making her look like she has gained five pounds extra. She is trying to stretch out her jeans, to make it look somewhat looser. But all her efforts are going in vain. The jeans, her parents and she herself knows what the situation is like. Her thighs are sticking to her pants and are giving a whole different picture after all. Standing in front of the mirror, her eyes meet her parents’ faces, who are sitting just beside her. Their lips are smiling but their eyes are not. She looks back to face her parents and no one utters a single word for a couple of minutes. Everyone is trying to come up with the right words, so as not to hurt the other person. But again, it all goes in vain!

Her father smiles and tells her that she should start going to the gym. Her mother stays silent, then she agrees and leaves the room.

Her parents are now staring each other. They both understand the proximity of the situation, but no one dares to repeat it again. She is already 25 years old, and now they want her to get married. They have started spending their evening time in suggestive talks with old relatives and informing them that their daughter is now ready for marriage, and so some good prospects are welcome.

The uncles and aunts have started giving suggestions to her, advising her what to wear and what not to, what all things should be posted on Facebook and what should not.

Her cousins are teasing her as she is the next in line to be getting hitched, in their family. They are dreaming of a winter wedding, the trousseau colours and all sorts of other things. The kitchen department is now shared by her mother and herself, where her mother is teaching, and she is learning. Her task is to cook good food. Mistakes are acceptable, but they should not be repeated. Adding to this, she has her own job do, too. She spends about 6-7 hours of the day juggling with domesticity, and executing her work. The office distracts her from her plight back home. During the evening, she talks with her old friends who are either looking for guys or are committed. They discuss the pros and cons of marriage life in general.

She tries to spend her late evenings with her parents, and so she disturbs them because they are busy sending her bio data to all the prospects they are asked to reach out to, from different references.

One more call, one more prospect and the mediator informs them that the prospect’s parents didn’t like her picture. The reasons may vary from her being over-weight or height issues, or maybe they did not find her qualification desirable. Her parents are now in a numb state of mind. This was the third guy who didn’t even initiate a meeting and still, she got rejected. She gets targeted again.

No one asks her whether she was interested or not and they blindly accepted that it was a rejection from the other end. Her weight became the topic of discussion once again.

Her parents started blaming each other for the liberty they had been giving to the kids. The girl argues and asks them to stop this sort of behaviour every evening and leaves the room. They continue accusing her of her rough behaviour too. Her mother gets picked on later and is asked to keep a check on her daughter’s dietary habits. All the relatives now have solutions for her accelerating weight, her pimples and even her height. Suddenly, everyone is an expert. Every afternoon, talks of her mother with her friends and family leads to yet another formula for making her daughter presentable.

Somehow, not being able to get married or being overweight have suddenly been getting the same attention as a serious disease, which, if not fixed soon, might damage the life of the girl.

Her father glares at her whenever she eats her dinner. He loves her, but that is a different matter altogether. His business tensions are adding to his concerns for his daughter. He spends most of the time thinking and this is increasing his blood pressure. The mother is stressed too. This stress doesn’t give them any solutions, and instead, they are making the girl worry why she is the way she is. She starts getting conscious of herself and this contributes to nothing, but adds dark circles below her eyes. One more unwanted feature in her unprecedented beauty! She is unaware of the things happening around her. In the struggle to be up to the mark as per the standards of the prospect’s family, she is being hated for what she is.

The memories of her childhood and adolescence where her parents showered her with sweets chocolates and gifts every time, were flashing in front of her.

She was labelled as cute, chubby and sweet up until her beginning of her 20’s. Now suddenly, the same people are blaming and cursing that same cuteness and chubbiness. The society has somewhere extended its horizons to such a level of mediocrity and hypocrisy that even parents of daughters are encapsulated in it. It is not difficult, but it has become impossible to ask a father to leave aside society’s standards and start taking care of his kids as his own kin and do so according to the child’s wishes. But the parasites of illogical thinking that have hollowed the society to the core, where the parents also only think along the same lines, irrespective of what is right. We have been immune to this growing culture where unknowingly we have accepted these myths as part of our tradition. We judge each other by looks and the weights of our daughters and daughters-in-law, makes a lot of difference.

We don’t stop for a moment to think that this cycle will continue the same way if we keep on repeating it and eventually everything that will end up being blamed, cursed or pitied upon is the same cute, chubby sweet looking, darling daughter.

Everyone should attempt to be fit, but let us not promote it for the wrong reasons (read: incessant vanity).  Share this story for the right reason.