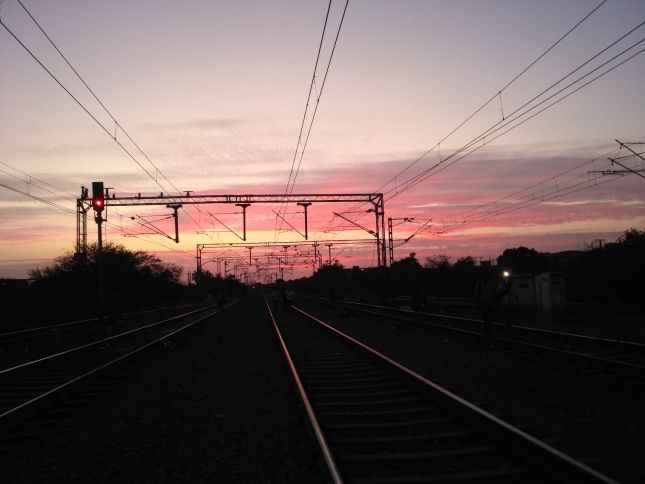 The vacations flew by, just like all happy, fun filled, enjoyable vacations do. We had travelled in trains and cars, attended weddings, played and fought with our cousins, ate and drank all the good stuff there was!

Basically, the whole time that daddy and his friends were living and fighting for one day at a time, not just with the other side, but with the difficult surroundings, braving the weather, eating cold food, craving some connection with family, dealing with the injuries and deaths of their brothers in arms… we were living a parallel life, in the same country, just in another city, making merry.

The thought of it now, makes me cringe.

However, all good things come to an end, and so did the vacations. We were going to leave for Delhi in a train from Siliguri the next day. Mummy along with my mausi(aunt) had gone and met a baba who was renowned for predicting the future, a day before we had to leave. They were told that Daddy was going to come back safe, in fact, he even told them that he was going to call us the same evening, which he did, and so, we were relieved.

Daddy’s calls were precious. Since, in those times one had to be at home to be able to take them and especially from an area and circumstances that he was in, they weren’t so regular. So the days that we got to speak to him, at the time, felt better than our birthdays. One can imagine the joy of receiving one as predicted by the ‘learned’ man, since it also meant that his predictions were not to be doubted. I was the first one to talk to him. Passing the receiver to Mummy. When she spoke, she kept asking him if something was wrong, because he didn't sound like himself. He repeatedly told her, she was just being paranoid and that he was fine. Was it an instinct? One would never know.

Unfortunately, I do not remember much of what I spoke about, except that he mentioned sending out a letter that we would receive soon. Asked about how the vacations had been, and said he’ll be back soon. He had been telling me how he had managed to find and grow eight different types of roses, so I would always remember to ask about those too. He then called for Diksha, but from what I remember, by the time she could come and talk, the line got cut.

It didn’t matter too much at that time. She could speak to him the next time. For now, we were packing and preparing to leave the next day.

So, on the morning of 2nd of July 99, all our bags were packed and we were ready to go. My mother, my sister, my older (cousin) sister, and the nephew of a family friend. All of us were on our way to Delhi.

Now, in the train, something really strange happened. I remember feeling surprised about it even then. In the night, when everyone was gearing up to sleep, a lady got annoyed of us chatting, and screamed to let her sleep. While normally I wouldn't even think twice about it, that particular night, I turned around, missed daddy, and cried silently, wishing he was there, for then maybe, she wouldn’t have dared to.

I have no idea what made me think that? One, she still could have, irrespective. Two, I really didn’t have to think of him in this particular situation and cry the way I did.

But, strangely enough, the night of 2nd July 99, when all was well in my world and I was on my way back home from the summer vacations; for no good reason… I cried myself to sleep..

We were fast approaching our destination.