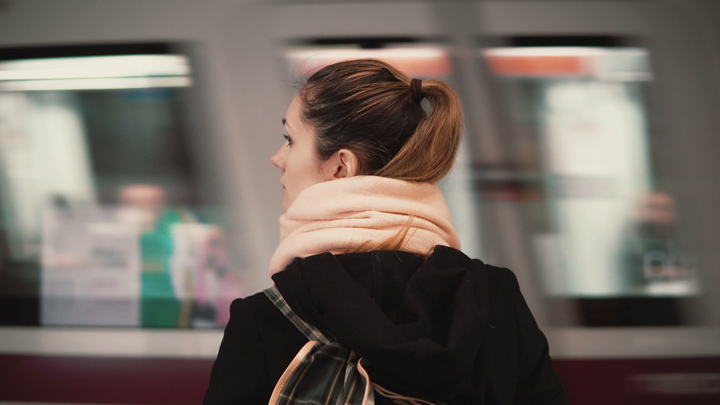 'Expect the unexpected' should be the tagline of life.

We unexpectedly meet many strangers and they unknowingly become an integral part of our life. We come across strangers in crowded places like the airport, bus stand, railway station etc. In fact, these strangers often make our journey interesting.

It always feels good to have somebody with whom you can share your thoughts or express your excitement during a journey.

And what if you fall in love with the stranger you are travelling with? It is possible because life is filled with surprises that add some spice to our monotonous lives. This is a love story of two strangers who could have met and gone their separate ways but God had something different planned for them.

Rehaan was a 25-year-old Delhi guy who worked at Infosys. He was frustrated with his mundane 9 to 5 job. He felt totally hassled by the work pressure and had no clue about where his life was headed.

If you’d ask him to describe his life, he would call it ‘dull and boring’.

But an unexpected meeting with a stranger changes Rehaan’s life forever.

"I want this work to be done by 8 p.m.," said the boss. It was a normal working day but with an extra amount of work for Rehaan.

He wanted to scream out loud but all he could do was patiently sit and complete the task.

He managed to finish his work by 8:30 p.m. and literally rushed out of the office after the submission. He was so stressed that he smoked a cigarette outside the building and finally, breathed a sigh of relief. His home was an hour away from his office and he traveled by metro every day.

When the train arrived, he went and sat on the seat near the door. The metro wasn’t really crowded, so he kept his bag on the seat next to him. He had a newspaper and started solving the Sudoku puzzle. "Can I sit here?" asked a female voice pointing to the seat where his bag was kept.

He lifted his head and saw a girl standing in front of him. He was so busy in solving the puzzle that he didn’t hear what she said. "Can I sit here?" she asked again. "Oh! Yes, sure," he replied. He kept his bag on his lap and went back to solving his puzzle. At one point, it became so difficult that he was not able to move ahead in the puzzle.

Just as he was about the fold the newspaper, he heard something. "It’s 2 there," said the girl sitting next to him. "Sorry, did you say something?" he asked. She asked him if she could solve the puzzle and Rehaan agreed with a smile. He thought that she would give up after a while but surprisingly; she solved the puzzle in less than five minutes. "Wow! You solved it and so quickly; you are a genius!" he said in a surprised manner. "Thank you so much," she replied.

He was amazed by her intelligence and was curious to know more about her.

"Hi! I’m Rehaan," he introduced himself and extended his hand. "Oh hi! I’m Ananya," she replied shaking hands with him. Rehaan was curious to know how she was so good at solving Sudoku puzzles. "Actually, my father made me solve these puzzles daily. I guess that’s why I’m good at them," she replied.

"That’s great," he said. He couldn’t stop himself from asking more questions, as he really wanted to know her. "Do you work here in Gurgaon?" he asked. "No, I was here to visit somebody," she replied. "I work in New Delhi," she added.

"Really? I live in New Delhi," he said in an excited tone. He wanted to take this to the next step, so he tried to flirt with her. "You know, there are very few girls who are intelligent as well as beautiful."

"It’s a deadly combination and to be honest, any guy can fall for such a girl. And you are that kind of a girl."

He said with a wide smile on his face. "Oh really? Thank you so much," she said and blushed. She too seemed to be interested in him and tried to continue the conversation. "What do you do in Gurgaon?" she asked.

"I work as a software engineer at Infosys," he replied. "That’s nice," she sounded impressed. Neither of them wanted to stop talking but they didn’t have anything to talk about. Suddenly, she saw an empty bottle lying in the corner. She took the bottle and asked Rehaan if he’d like to play a game of truth or dare. Rehaan readily agreed. He felt a special kind of bond with Ananya.

She was the kind of girl he was looking for. She had an enigmatic personality, which he was instantly drawn to.

He wanted to know more about her so a game of truth or dare seemed perfect. She spun the bottle and it stopped at Rehaan. "Truth or dare?" she asked. "Truth," he replied. She asked him if he was single and he replied in the affirmative. "By the way, you seem interested in me," he added looking into her eyes. "Shut up! I’m just asking, don’t get any wrong ideas," Ananya replied with a smile.

She tried to hide many things behind that smile but it revealed everything.

"Let’s continue," he said. She spun the bottle but this time it stopped at her. "Truth or dare?" he asked to which she replied truth. "What kind of guys do you like?" he asked. "Sweet, caring and innocent…like you," she said, laughing.

"You are a bigger flirt than me," he said. She was laughing hysterically now. They were having a great time together until he realized that they would reach the station in 10 minutes.

"10 minutes to go...let’s play one more round," he said. She agreed and this time, he spun the bottle and it stopped at her again. She opted for a dare. Rehaan dared her to go and ask one of the male passengers for his mobile number. He thought that she would shy away but she went to the person and asked for his number. And he willing gave her his number.

"You are awesome," he said as she returned with the number. He was genuinely amazed by her courage.

She spun the bottle again and it stopped at Rehaan. "Truth… I’m not good at dares," he said. "Tell me the names of your ex-girlfriends," quizzed Ananya. "I’ve had only three girlfriends and their names were Srishti, Priyanka, and Shreya," he replied. "But I think I’ve found my fourth girlfriend," he added looking at her. "You are such a flirt", she said.

Ananya added with a smile. Soon, they reached their destination and continued talking as they got out of the train. Rehaan asked her when they could meet again. "Are you free now?" she enquired. When he said yes, she suggested that they go on a date at that very moment.

"Wow! A coffee date?" he sounded excited. "No, let’s go on a pani puri date," said Ananya with a gleam in her eyes. "What? Are you serious?" he asked with surprise. "Actually, I had this craving to eat pani puri today," she said. "Then let’s eat," he said and gave her a high five.

As soon as they got out of the metro, they saw a pani puri vendor. Ananya told the vendor to make the pani puri spicy. As they ate, Rehaan literally shouted for water as it was really spicy and he was not used to spicy food. "Wait! I have a bottle of water," she said and offered a bottle from her bag.

He drank it and asked her if she wanted some but she refused because she didn’t want to ruin the taste of the pani puri. She wanted to spend more time with him so she asked him if he could walk her to her house. As expected, he said yes and they started walking. He started cracking jokes and made her laugh the whole way.

She was so awestruck by his charm that she couldn’t stop herself from saying, "I like you stranger", again even as her cheeks flushed red.

He blushed too. After a few minutes, they reached a deserted corner. It was 10:30 p.m. and there was no one on the streets. "You had three girlfriends, right?" she asked. "Yeah?" he sounded surprised. "What about the fourth one?" she asked. "What?" he was confused.

"What about Akriti?" asked Ananya. "Who are you?" he asked. His face went pale and he looked frightened. "Don’t panic," she said calmly.

"Who the hell are you?" he shouted and tried to grab her neck but as soon as he went close to her, he felt a sharp pain in his chest.

He clutched his chest and fell to the ground. "Don’t worry. I had mixed a special drug in the water you drank while eating the pani puri. This drug increases your hormone secretion, which increases your heart rate. The chest pain is a result of your rapidly increasing heart rate."

"It’s just a matter of minutes before you stop breathing," she said.

"Who are you and why did you do this?" he asked. She went close to him and whispered, "I’m Ananya, Akriti’s elder sister, the girl your friends and you raped at a party two months ago. She was so traumatized by the incident that she lost her mental stability and had to be sent to a mental asylum. I was in the US for my studies and when I came back, I was shattered to see her in that condition."

"Nobody complained to the police or gave a statement because they feared the consequences. Everybody knew about it but didn’t have the guts to say that to the police."

"This is the biggest problem in our society. As long as people remain silent, rapes will happen.

She had tears in her eyes and anger in her voice. "Your pain is nothing compared to the pain my family and I have had to go through. I’ll breathe a sigh of relief only after killing all you b******s. You will soon meet your friends in hell."

"And one more thing… I hate you," she said disgustedly and left him to die on the road.

As he took his last breath, Rehaan realized that karma is a b***h and everyone has to pay for their actions.

Share this story if you agree that life works in the most unexpected ways and no one can escape their deeds. Everyone has to pay for their actions in one way or the other.