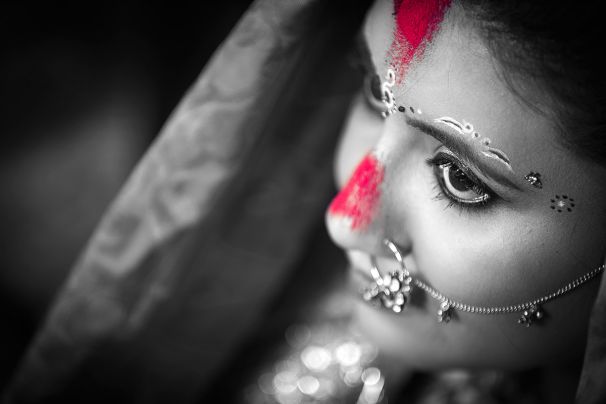 He held me close, and patiently waited for my answer. I maintained my silence, gathered the storm of thoughts in my head, took a deep breath and replied, "Yes, I am sure, there is no second thought about it."

Ten years of togetherness and after going through so much, it was finally time for the next step- a divorce.

He slowly let go of my arms. They had turned red by then. His fingers had left an impression which was fading away by the second. He left the room, and there I was, alone. I was expecting a response, a fight, an argument but to my surprise, he wasn’t his usual self that day. He quietly made his exit. These fights were a permanent feature in our schedule for the day. Love? I don’t even know if we could tolerate each other anymore. No conversation was shared without a fight or a reference to an old one we had a few hours, a day or a month earlier. Is this why we get married? To vent out all the frustration on each other, the frustration which is a gift from our friends, family, extended family, and workplace?

I can’t remember the last time we fought with each other because of 'US'. It is mostly the kids, finances, duties, responsibilities, and the not so important 'others' in our lives that result in high pitched voices and harsh comments.

Honestly, I was tired of hearing about my shortcomings, my flaws, and my bad habits. He started with one thing and smoothly shifted to another. He said things which were bad and the way he said it, oh God! You will have to give it to him for devising a new way to insult me, every single day. He could write a book — "Countless ways to belittle your wife."

Chetan Bhagat, you might just have a competitor for 'The most worthless bestseller of the decade' award, and let me warn you, my dear husband will win it without a doubt!

I won’t be partial. I too have my own list of things that annoy him. I too know how to make my way from just a conversation to the most dreaded fight ever. Sometimes, I know I am being unreasonable. But then who wants to admit it, especially when they were the one at fault in the last fight as well? We were tired of fighting, our kids were tired of seeing us fight. But two people who don’t seem to agree on things can do only one thing- fight! That day, I waited for him for hours, and he didn’t turn up. It was not the first time we had used the word "divorce" in our fights. Yet, it was different this time.

His silence gave the word the depth it was trying to find for a long time. Maybe, that was it. Bitterness had taken over everything- the romance, the understanding, the love, the togetherness, and everything had finally turned into nothing. I never thought divorce was an option for parents but things had turned so ugly that maybe we weren’t left with another option. He came home very late that night. Didn’t speak to me and slept. The silence continued for days and I was beginning to accept the end of our marriage. I purposely cooked brinjal that day, so that he could fight again. He hated it and every time it was on our dining table, a huge fight just followed. But that day he ate it, just like he gulped it down at one of his colleague's place a few years back. Dinner party manners at home? That was the clearest sign of distance between us.

"I can’t throw tantrums everywhere you know. You are mine, I have the right to demand things with you. Not with every random person. I can only be myself with you right? That is why I am married to you and not her," he had said that day, and it had secretly made me happy.

Was this his way of saying that he didn’t want to exercise his right on me now? He couldn’t demand things from me now? That is when I realized, things can’t end like this. We fight, oh yes we fight like bloody cats and dogs but that doesn’t mean we HATE each other. Every small problem I had in my life, it was him I called. Not because I had to but because I wanted to. If I would not fit into my old jeans, I would call him and he would ridicule me for turning fat, saying it in a way that made fat sound cute to me. I would have a bad day in the office and he would make sure that I came out of it.

There were times I had hated my mother for a few things, but the way he adored my parents made me love her again. Our kids! They are our kids because they are a mix of both of us. I couldn’t dissect him out of them. I loved him and will love him forever. Also, I didn't want him to have his own way. If he thinks he is "suffering" with me, then so be it. I will make him suffer for the rest of his life. I will not leave him to his sugar fetish and lethargic lifestyle. I wouldn’t mind him shouting at me for hiding all the sweets on Diwali and for dragging him to the gym everyday, but I can’t see the love of my life spoiling his health with an overdose of ghee and mithais. Him? He also never wanted it.

His silence was killing him more than it was killing me. He wanted to throw those bloody brinjals and shout at me but then it was his way of making me realize what I was going to lose. I never used the term "Divorce" again.

Only a man who knew me could have made me realize my mistake. He did, and that is why he is my man. Divorce was never an option for us, I realized. It is not for most of us who have tied the knot. It surely is an option that often comes to our mind but we would never walk that path. Marriage is hard. We often think divorce is easy, but it is harder. I chose the easy way out, like most of us. Relations aren’t supposed to work automatically, machines are, we aren’t machines. So we need that effort, that push, that communication and sensitivity, and that empathy to pull the cart of our family. I realized that I would rather put my efforts in making it work than breaking it.

Make it or break it, it will always be in your hands. Just when you are about to give up, ask yourself, "Why did I hold onto it for so long?" If you find an answer in him, you aren’t going anywhere Miss, he is where your heart is.

Do I still think of a divorce after a fight? Yes! Do I say it now? No! Will I sign that sheet of paper in front of a judge ever? Hell No!

I am a frustrated wife like everyone else who was, and still is tired of fighting with her husband. Divorce is what we had thought would bring peace into our lives. It took me a while to realize that he is the peace of my life. I would never risk losing him. Every marriage has fights, every relation has fights but giving up is not what we should do. Divorce becomes a necessary option if the marriage is abusive or if there are more serious problems. I realized how ridiculous it is to divorce a dearly loved husband over simple adjustment issues. Don't you agree?