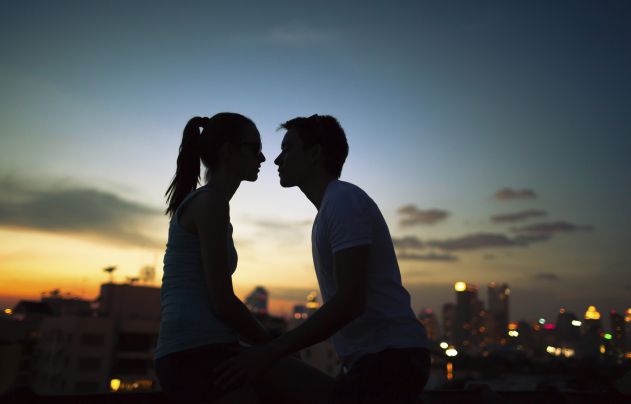 This is going to be a long story. It is nothing short of a fairy tale but with lots of twists and turns. A humble request to all the readers, please do not judge the characters of the story.

There are certain things which are not in our hands, the cosmos is at play.

It took me almost a year to get over my break up. It was pretty tough for me. Thanks to all my dear friends and family, I sprung back to my bubbly self and got my life back on track. That entire episode made me a better and wiser person. I came out pretty strong. After enduring all that excruciating pain and successfully overcoming all my insecurities, I decided to join a dating app and explore my options. I was not looking for anything serious. So last year in the month of October, I joined a dating app. I was scrolling through the profiles of guys, and I stumbled upon this profile of a PG Medical Student. I went through his profile, checked his pictures and those eyes, I am not exaggerating, they were so captivating. There was something special about his eyes.

I had never used any dating app before, so I had very little idea about the dynamics of such an approach.

Fortunately, or unfortunately, somehow I ended up sending an invitation to this guy. Next morning, I woke up to this notification on my phone: Nik (name changed) has accepted your invitation. I was in a state of shock, when did I send an invitation? Who is this Nik? I tried to recall and opened the dating app to check if I had. To my utter surprise, yes, I had sent an invitation. Alas! What have I done, I thought to myself. I was scared and deep down inside I knew, I was not ready for a casual fling. That entire day I tried convincing myself to write an apology text to Nik and simply log out of the app and delete it too. By the end of that evening, I received a text message from Nik on that app. He wrote "Hi, I am Nik, from Kerala and currently based in Kolkata, doing my post-graduation, a med student. Oh, good lord! My heart started to gallop crazily. What was I to do? I was nervous, and bad thoughts started to run through my head. What if he turned out to be a hooker? What if this entire idea of online dating was the worst idea ever? I thought for a while and called up my best friend Su (name changed). Su laughed at me. Oh, man, she laughed so loud! I felt embarrassed.

She said, "P, why are you acting so juvenile? Do you realize that you are an adult? What is wrong with you? Go for it. It's just an online chit chat. If you do not like him, simply bail out." Phew, I was acting weird, actually.

After that much-needed boost, I gathered some courage, replied to Nik and I introduced myself. We realized that we both had our share of inhibitions as far as the online dating concept was concerned. We exchanged our WhatsApp numbers that evening itself. And it just took off from there.

We were comfortable speaking to each other without the fear of being judged.

At that time, I was at home busy with my PhD fieldwork. I hardly had any time during the day, on the other hand, Nik was busy checking on patients and attending lectures in the hospital. Every day we waited for each other’s text messages and it was all very friendly. After a week or so, he asked me why I joined the app. Lord! He caught me. I honestly said, "I just moved on, had a terrible breakup. I was looking for friendship." Nik kind of mocked me and insisted we date online. I asked him, "how can you trust a stranger and date?" He replied, "I am a risk taker, I love to explore." I told him, "we both are staying thousands of miles apart, I won't be going back to Kolkata before December. Moreover, online dating is not my cup of tea." He replied, "okay" and stopped texting me for a few days. I thought it was over. I didn't feel a thing, I was any way scared of putting myself in a vulnerable position because after two nasty heart breaks what else to expect. Not so strangely, after a week or so, Nik texted me asking why I was ignoring him.

I explained to him that I was not ignoring him, he stopped texting, so I thought that we both were seeking different things from each other.

He said, "P, I am really very impressed, you are a strong girl. You held your ground so well. I really like your honesty and respect you.” So, as you can see, we started exchanging texts again. And this time I could sense that he and I were meant to be something, something that I was scared to acknowledge and even think of at that moment. Towards the middle of October, my maternal uncle fell very ill. He suffered a mild stroke. Looking at my uncle's health condition and tension that prevailed in my family, I thought I should discuss it with Nik. Prior to that I never spoke to Nik over the phone. So, for the first time, we spoke. He was on a road trip. He took about half an hour of time out of his schedule and helped me out with the prevailing situation. Trust me, his diagnosis of my uncle's health condition was absolutely correct, and that too just over the phone. Damn!

This guy is intelligent and passionate about his job. Wow, that is such a turn on for me.

I found him very compassionate, caring, intelligent and yeah, he has a great sense of humour too. From that day on, every day while commuting back from the hospital, he would give me a call and we would speak for an hour or so. Once he said, "every day I speak to Maa while driving back home, now I speak to her a little less so that I can make some time for you too." I was touched and scared too.

I didn't react to his statement, though. Our conversations were so meaningful. We both could express ourselves so well.

After a tiring day of hard work, we both found solace in each other’s company. Then one fine evening, Nik could not hold back his emotions. He poured his heart out. He conveyed to me how he felt being with me. How empowering and blissful it was for him to express all of his thoughts and discuss his issues with me.

He said, "P, I have never connected with anyone on this level. I feel more myself around you, I can sense the warmth in your laughs, I can sense the affection that you have for me. I can see your soul."

My heart skipped a beat, and I started crying. At that moment, I knew. We were in love. A feeling so profound and strong that for the first time in my life I felt that yeah this is the person who knows me inside out. Nik is perhaps the best thing that has ever happened to me. He didn't ask me why I cried.

He understood my emotions and I understood his silence too. We spoke for another hour and I spent a sleepless night.

Read the next part here: I Knew I Loved Him But I Had To Keep Refusing To Meet Him

Share this story because it beautifully narrates selfless love.