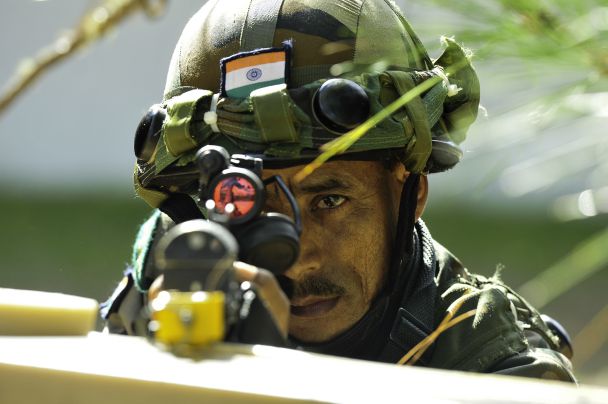 Don’t take your freedom for granted. Thousands of people willingly sacrifice their lives to ensure that you live a safe life.

Yes. I am talking about all those brave young souls – those human beings who have bodies of steel – those men who stand at the frontier to safeguard you and your family - those men who stay miles away from their own families to ensure that you are safe.

Working in the army is not a job. It cannot be called a job. Army men and officers are educated enough to get any respectable job in any corner of the world. Yet they choose to stand in freezing temperatures of around -50˚C to do the things that they believe it.

But my mother’s wish remained just that. A wish.

My mother had to bring me up on her own. Life was so tough that we weren’t sure if we could make it to another day.

I have seen my mother holding my hand and crying her heart out because she was not sure if she could become a good daddy.

All children deserve to get the love and the care of their father. But what happens to kids who are deprived of this love despite having their dads?

Whenever my father called home, my mother would turn up the volume on the speaker so that I could listen to my father’s voice. He got limited time to talk to us on the phone. I would leave everything and rush to the telephone just to listen to his voice. I hadn’t seen him in real so far.

I saw him for the first time in my life only when I was three years old.

One day my mother said that my father was coming home on a holiday for a few days. I was so overwhelmed when I heard this. I was finally going to see him for the first time in my life.

I spent the first few days just getting to know him. By the time we got used to each other, it was time for him to depart. He kissed me on my forehead on the day he left us.

For him, his nation was more important than his family. I respected that. But I couldn’t stop my tears.

I knew my tears were having a deep impact on my father too but we had to bid each other goodbye. Would destiny allow us to get together again? We didn’t know but we lived with hope.

Living with this kind of uncertainty had become a way of life for both of us now.

I remember the time when I first went to school. My mother was holding one of my hands. The other children in the school had come there with both their parents. The mother held one hand while the father held the other hand of the child.

That day I really missed my father.

My father was not around to clap for me when I was on stage for my first dance performance. He wasn’t around when I became the head girl of my school. I had spent several birthdays without him. He had never attended any PTM in my school. The list goes on and on.

I always thought that I was the only one who got hurt by all this. But I was wrong. It hurt my father even more than it hurt me when he was not around us at such times.

It hurt my mother even more than it hurt my father but she never let me know about it. In fact, I think my mother has wasted a lot of energy pretending to be happy in front of me.

Years rolled by. I still remember the date clearly. It was the 17th of September. My father was posted in Uri. I received a call from my father. Fights were going on in that area at that time.

My mother talked to my father on the phone and told him to forget her and me while fighting with the enemy.

My father said, “I won’t move even an inch backwards while fighting the enemy. I will fight with the enemy until the last breath of my life.” I then took the call. I asked him when he would return home.

He proudly said, “I will return either with the tricolour or will be wrapped in it. But I will return home shortly.” I burst into tears. I could not understand how he could do this. The enemy was just 50 yards away and it was as if death was playing in his hands.

It was the 18th of September, 2016. It was 8.45 a.m. I felt as if I was having a terrible dream. I felt as if the earth had moved from below my feet. My mother sat down to catch her breath. Her lips trembled like rose petals. We were not ready to accept the reality.

But when we saw them bringing in the coffin covered with the tricolour we were forced to accept the reality. Mother wanted to have a glimpse of his face for the last time. But they could not fulfil her wish because the body was not in any condition to be opened.

My father had taken three bullets around the neck. His head had been severed from the rest of the body. I couldn’t even see my father for the last time.

That was the day I wrote these lines in my diary:

Behind that tough body, that proud tilt of the head and that smart uniform lies a genteel humane soul. That proud man is someone’s son/husband/brother/father/lover/friend. Yet he stands tall and does not flinch in front of the enemy – because his love for us and our country means more to him than his love for himself and his family. Let’s share this story and salute the spirit of all these brave men because we owe our freedom to them.