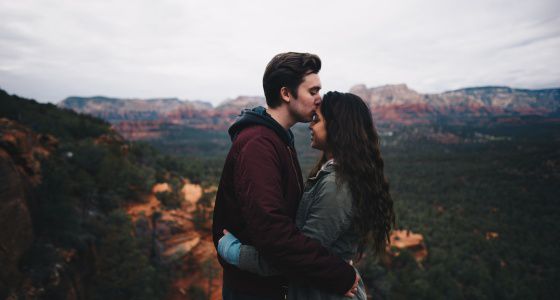 We were madly in love with each other. We got married at the age of 27, even though he wasn't settled professionally.

He had quit his job and was trying to set-up a business of his own. He was the man of my dreams and his financial status did not deter me from marrying him.

He came from a semi-literate family who didn't understand the scope of his business. They would constantly worry about the world and it's opinion and what people would say of their son leaving his job for a business.

I had always asked God to bless me with a partner who would understand my passion and love for society. Someone who would allow me to serve orphans and make a difference to society. When I met my future husband, I told him about HOPE and how I wanted to reach out to many people through it.

I told him that I believed in the miracle of prayers and was a simple Christian girl who loved the life of a missionary.

We got married in 2012. It was one of the most difficult phases of my life because my father refused to attend my wedding. He didn't accept my husband. He had wanted a settled man for his educated daughter. I was working as a lecturer back then and I was emotionally disturbed at my wedding. My husband held me then and continues to be my biggest support. We asked girls at the orphanage to attend our wedding instead and we played Christian music. It was a small, sacred wedding.

After the wedding, my struggle began at my in-laws' home. My mother-in-law had apparently heard rumours about my family and gave me a hard time about it. In small towns, rumour and gossip fly at the same pace with which a tiny spark sets an entire jungle to fire. I was constantly under pressure to keep my mother-in-law happy, but she never tired of insulting and belittling me.

I was not allowed to wear western outfits and dresses. She expected me to do all the household chores like I was a domestic maid. Since my husband and I were struggling financially, we had to bear with all her tantrums.

She was instrumental in controlling our lives. I used to gulp down all the torture and the negativity at her hands and let them out only in front of my husband. I would have frequent anger outbursts and I would cry a lot.

I couldn't share all this with my parents and found my sole support in my husband.

He would take me for bike rides, wherein I would scream and yell about all the things his mother did to me. I know it was breaking him too, but I needed that outlet otherwise I would have gone crazy.

This continued for almost two years and once I became a mother to a child myself, I started losing my patience. My mother-in-law refused to keep a maid and I lost all my tolerance.

My husband had no respect within his family because he was still struggling in his career. My brother-in-law was treated like a king. We were like the unwanted couple in the family. I went through severe depression. Then one day, my husband took a bold step and that is the reason I am proud of him. He got me out of that house.

He proved that hard work and determination can bring anyone success. His business grew and he also completed his certification as a financial planner. We weren't the underdogs anymore.

We left for our new life. The bitter wounds healed with time and once again, I was back to living life on my own terms.  I thank God for my husband who has been a big blessing to me. He helped me to start off as an entrepreneur, on my own.

Today, I run English speaking classes and a play group for kids. I am making good use of my education and am also a homemaker.

My husband and my daughter are my two greatest blessings from the Almighty. My husband wasn't rich of money but he was rich of heart and that is what makes him unlike anyone else.

Share this story of love done right, so that many other couples may take courage from it.