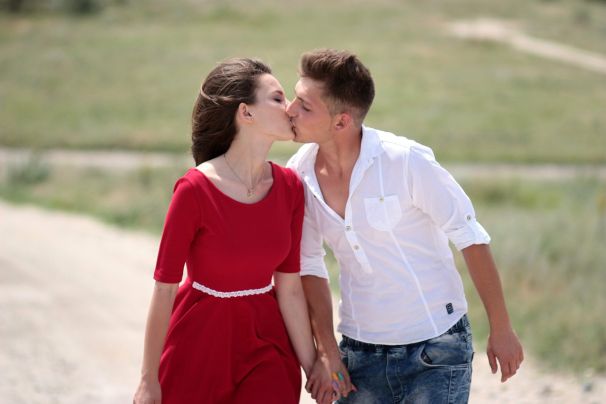 People say that the love that we experience in our school days is very precious and pure. I too believe that they are right when they say this. 16 years ago, on a pleasant Monday morning, my entire class was happy and in a cheerful mood because we were all meeting one another after a long weekend.

It was then that a tall, lean and innocent looking boy entered our class. He seemed shy and nervous.

All eyes were glued to him and we were all whispering to each other because he was a ‘new admission' in our class. He introduced himself as Aarav. I could feel the butterflies in my stomach – a feeling that I was experiencing for the first time in my life. I can never forget that magical moment of my life. Slowly, over a period of time, I felt I was getting attracted to him.

I felt like looking at him repeatedly. But I hesitated because I was scared. I was too shy to initiate a conversation with him.

I wanted to forge a bond of friendship with him but I was not able to do so. I was inquisitive to know more about him. I would quietly sneak into the staff room and go to my class teacher’s table to look for his details. I got the information that I was looking for after going there a couple of times.

I was happy to note that he stayed close to my locality. But I had not yet seen him in the events that were hosted in my locality. We travelled by the same bus every day but we never spoke to each other.

Days passed in this manner and I felt like I was missing out on something.

But one day, things worked in my favour. It had been raining heavily because of which I had missed my regular bus. I felt bad because I had not been able to travel on the same bus along with him.

But whatever happened, happened for good.

I rushed through the corridor as soon as I reached the school. And on my way to the class, I saw that Aarav was standing outside the class in the corridor. He was enjoying the rain. He had a smile on his face. The curve on my face involuntarily became wider. And as our eyes met for the first time, we exchanged smiles and greeted each other. That was our first interaction in so many months and it was the most memorable one. I had waited for this for so long. I felt good. I was happy and excited.

I felt like a warrior who had just won a war for his country!

The ice had finally broken between us and it was time for us to forge a bond of friendship. We spoke to each other every day on the bus when we went to school and returned home. We enjoyed each other’s company. I never got tired of talking to him.

In fact, I did most of the talking and he loved listening to me.

Slowly we found ways to spend more time with each other. So we avoided commuting by our regular bus and chose to walk on our way back home after school got over. We became close to each other and exchanged our thoughts about our mutual friends, childhood memories, family stories, academics, school etc. We imitated our teachers and cracked silly jokes. Sometimes we even spoke about our crushes and teased each other.

Over a period of time, our bond grew stronger.

It was during this time that I joined my music classes. He loved playing basketball so he too went in for professional coaching. We had to stay away from each other on two days in a week and on Sundays.

I missed him so much and felt as if there was a void in my life on the days that I did not get to meet him.

We did not have mobile phones so I could not tell him how much I missed him. I think he too felt the same way about me. I think he missed me more than I missed him. Our friendship grew stronger with time. It was unbelievable that he was a total stranger to me a few months back and that I knew him so well now. Sometimes I wondered how all this had happened and often I felt I had known him since my childhood. We shared a beautiful bond of friendship and I never wanted to lose out on it.

Most of my other classmates were planning to quit school after finishing the 10th grade. They wanted to join different colleges. I prayed and hoped that Aarav would choose to study in our school. I was scared of losing out on our friendship. Things worked in my favour again. He decided to continue studying in our school.

I was so excited when I came to know about this that I ran to hug him.

We shared a wonderful and memorable relationship for the next two years too. By now we had spent 5 beautiful years with each other. It was finally time for us to walk along different paths. We chose to study different branches of engineering and so landed up in different universities.

We could not meet frequently now. I thought that our friendship would fade away with time. I was wrong!

Life seemed awesome. In fact, I felt the physical distance was bringing us closer to each other. I could sense his caring nature and realized how he felt so protective of me. Everything about him made me crazy about him.

One evening, I gathered all my courage and confessed my love to him. Both of us were surprised because we did not know what was in store for us. We had both decided to confess our love for each other on the same day at the same time. It was such a coincidence. It was during this shared moment that we hugged and kissed each other for the first time. We were madly in love. We took our relationship to the next level now and we felt we had made the right choice. We were happy to have found each other.

Today we fight, we love, we kiss, we make love, we care and we support each other. Today we are married forever and we share a stronger bond with each other.

Yes, the love that we experience in our school days is truly pure and divine. I have personally experienced this and ours is truly a beautiful love story. I love you Aarav. Thank you.

It's beautiful to hear a love story which looks like a fairy tale isn't it? I wish this had happened but actually, something completely different happened in our life. I hope you enjoyed reading the first half of our story. I know you all want to know what happened next.

I would appreciate it if you send me your comments after reviewing the story. Thank you in advance.

Share this story because such childhood memories and bonds are really very precious for all of us.