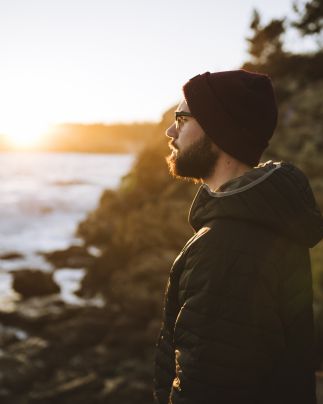 The month of June had started which meant the rain and schools both began almost at the same time. We were shifting to our new house which was a three-storey building with a terrace and owned by my uncle. The entire day went in shifting furniture and other household stuff. That is when I saw her first time and couldn't take my eyes off her.

The light brown hair and those big beautiful eyes, it was just amazing. I had never seen something like that before.

While I was carrying the bed towards the lobby with my uncle, she was trying to pass from the same area. I told my uncle to give her side so that she could pass. But my uncle said, "No beta, you move to let her go up. She also resides in the same building on the second floor.”

I was thrilled and surprised all at once. It meant I would get to see this beautiful face every day.

The very next morning, I was getting ready for my school which was at a walking distance from our new house. Just while combing my hair in the mirror, I looked out of the window and the same girl was taking her younger brother to school. Her brother was wearing the same school uniform as mine.

Immediately, I wore my shoes and ran without eating my breakfast.

I followed them and with some courage, I went and asked her (yes, asked her because last night, while shifting she had seen me and knew that we had shifted on the third floor), “You can go, I'll take him as we both are from the same school.” She said very slowly in a sweet voice, “No no, it’s okay. Thank you so much.” But still, I insisted and we all went together. While coming back home, anyhow, I found her brother and saw her standing far under a tree. I was extremely happy and told her that she didn’t have to worry every day as I would take him along with me and bring home safely. Later, she agreed this is how we became friends.

One fine day, I was combing her hair. Yes, now we were so close that I used to comb her hair.

And there were several visits to her place in a day. She had long beautiful hair. While combing when my hands used to go downwards, her face used to come close to mine. This thing happened a couple of times and suddenly, I don't know what came into my mind, I just placed my lips on her lips. No moving, nothing. I just stood there without any other movement.

After that, I quickly ran into my bedroom and started crying that what I had done.

I saw her standing furiously in front of me with an iron rod in hand and said to me that how dare I did that to her. Nobody has ever done or touched her like that, and I had crossed my limit. She wanted to break my face and asked me not to show my dirty face again, and she left from there.

A couple of days passed, I was always trying to hide from her just because of the awkwardness and embarrassment.

I asked my mother and went to my aunt’s place to stay for some days which was quite far from my new house. I heard my aunt talking with someone that the same girl Pari (nickname) was very serious and admitted to the hospital which was near to my new house. I had promised myself that I would never face her in my entire life.

But after hearing those words, I became very impatient and anyhow wanted to see her.

We were good friends. We used to be together all the time and even ate food on the same plate sometimes. It was evening time and I couldn't wait until morning to go. Suddenly, I came to know that my uncle was going somewhere near to my house for a wedding with my cousin. As he was a heart patient there should be someone with him always to take care. I insisted my cousin that I would take proper care and go with him at the wedding. They agreed and we left but after reaching there, I came to know that she was shifted to another hospital as the situation was critical with her.

Anyhow, I managed to know the hospital name and I left my uncle at the wedding and went to visit her.

I had to take a train from there but it was too late and there were no trains. It was cold and fogs everywhere. I saw the goods train moving in the same direction. Without thinking anything, I started running on the parallel track following the train. Due to fog, hardly anything was visible. Continuously running for about 10 minutes, I heard someone saying “move” as there was a training coming towards me on the same track on which I was running.

I was about to die that day but those two men on the goods train pulled me up and started yelling at me.

“Why can't you wait till the morning for a passenger train? What is wrong with you?” I cried and said that someone very close to me was in the hospital and anything could happen so I had to reach there ASAP. Those kind men increased the speed of the train and didn't stop much on the stations. Finally, I reached the hospital after searching for about two hours. I found her lying on a bed and her mother was washing clothes in the washroom. The water tap was open so fast that she could not listen to what was going on outside. Pari looked at me with half eyes opened and suddenly, jumped from the bed and hugged me tight and started crying.

The girl who was so critical and couldn’t move from the bed immediately started running, it felt like a miracle to me.

She shouted at me and kissed my forehead, cheeks and everywhere. She asked me never to leave her and my reaction was the same. At that day, I came to know how much in love we were.

This is how my beautiful innocent teenage love began.

Share this story because love is inevitable. After all, it's such a sweet teenage love story.