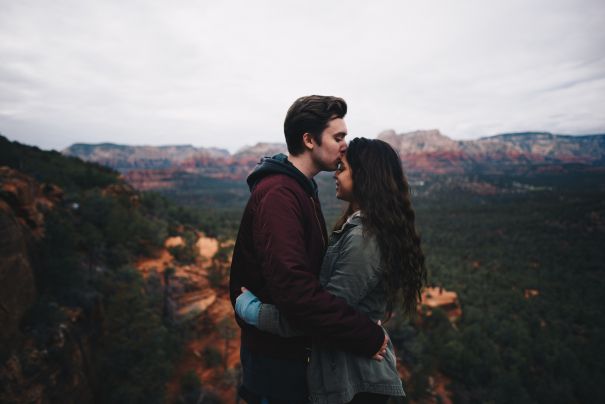 Life is often like a roller coaster ride. It depends on how you choose to look at the ride. You can either enjoy it or feel nauseated by it.

I fell in love with one of my school friends. We never spoke much to each other when we were in school. But over the years while we were hunting for jobs and settling down in our lives, we met again. We stayed in different cities and had different kinds of jobs. We had so much to share. It was fun to discuss so much with someone you knew. Slowly, we went on to become good friends.

We shared our secrets with each other. We talked to each other until late in the night and slept in our respective offices the next day.

After some time, we both knew that we liked each other. It was as if we were waiting for someone to open the floodgates. I did this. I went ahead and met her in Delhi. We spent some awesome moments together. I expressed my feelings to her and we both immersed ourselves deeply in an ocean of love.

We discovered the synergy within our relationship. We both were mad about each other and deeply in love. We knew that since we had started on such a strong positive note, we would rock as a couple in future too.

We started sharing everything. We were now the most discussed couple in our friends' circle. Our relationship was smooth sailing for six months. After that, we decided to tell our parents about it. Our families reacted in an unexpected manner. We faced a lot of hardships. We cried and cribbed but we both held on to our love firmly. Her parents were staunchly against our marriage.

At one point in time, I thought of giving up because it was proving to be detrimental to her relationship with her family.

When I told her about my feelings, she went and rammed her car against a divider and got hurt in the process. I could not take this kind of madness from her. So we promised that we wouldn’t hurt ourselves and would face this together by being strong.

Amidst all these glitches, I never once doubted her or questioned her. We did fight over certain issues sometimes, but ours was the perfect kind of love.

We never went to sleep without speaking to each other. I thought the worst was over but one day she gave a call and said, “It’s not working out anymore. We have to part ways.” At first, I could not understand what she was saying. When I questioned her she said that her parents would never agree to our relationship and she could not go against her parents’ wishes.

When I asked her about our relationship and all the promises that we had made to each other, she said, “No one dies after a breakup. We both have to accept it as our destiny.”

The hardest part was that our relationship had lasted for two and a half years and we had always avoided using the word ‘breakup.’ I could not even imagine my life without her. She was crying and sobbing because she was hurt but she left me. She called me up a few days later to find out if I was OK. I said, “Let’s meet up.” She refused.

Within two months, I knew it was over between us and we would never be together again.

But after four months I got to know that she was in love again. She had married my best friend. When I got the news, I felt as if a bolt of lightning had struck me.

I did not know where to go that day. I felt as if there was nobody left in the world to help me vent out my grief. I laughed and cried at the same time. It was as if it was raining while the sun was shining.

I accepted it as my destiny and moved on with my life. I picked up the broken pieces of my heart but lost all hopes of ever loving someone again.

Today, I am married. Something beautiful is happening in my life. She is ‘My Wife.’ She helped me pick up the broken pieces of my shattered heart and has taught me how to lose everything and laugh at it with an open heart. I love my wife.

‘True Love’ is almost always taken for granted. Let’s learn to appreciate the people who love us so much that they accept us the way we are. They will quietly simply listen to us and lend us a hand of support without ever asking for anything in return. They will help us heal by their constant presence in our lives. Let’s share this mature young man’s story so that, like him, we all learn to respect and appreciate what our partners are always doing for us.