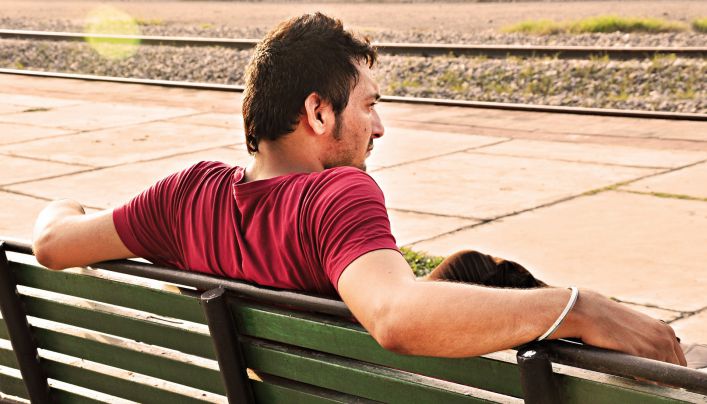 I am studying medicine. I didn’t like the college when I first saw it. But I was under immense pressure from my parents and relatives so I had to finalize my admission here. I literally hated the college that I was studying in but slowly things became better and easier for me when I started making friends.

No. It was not 'love at first sight.' We became friends after meeting in college.

Initially, she didn't like me at all because I would always irritate her.

She would always keep quiet when I irritated her. She lived in her own world and didn’t let too many people enter into it. She didn’t talk to many people either.

She had a quiet introverted personality yet she was beautiful in her own way.

She began talking to me when I had those silly irritating conversations with her. We did not even realize when we became friends. One of my roommates liked her a lot and I liked another girl. It was all going on well but I did not know that life had so much more in store for me.

I knew I liked another girl. I also knew that my roommate had a crush on her.

But I don’t know when I started falling in love with her despite being aware of all these other complications. I was getting attracted to her simplicity, her manner of talking and the way she conducted herself.

I felt shy and did not know how to disclose my feelings to her. But she somehow managed to take it all out from me. After a few days, she said that she too loved me. That was the best day of my life and it will be etched in my memory forever. I didn't know that life would take on such a beautiful turn in my life.

Things were going on quite smoothly between us. But my roommate too started developing feelings for her. When I came to know about it I tried to resolve the fight between them. I didn’t want to hurt him and I now wanted both of them to talk to each other.

I was happy with the thought that at least the three of us could be best friends now.

In trying to resolve their fights, I started fighting with her. We now started having a lot of misunderstandings amongst ourselves. I didn’t know how to get out of this mess. Earlier we would talk to each other daily but now we had not spoken to each other in months.

But in spite of all that was happening in our lives, I knew that I could not afford to lose my friends.

I would always fight with her because I did not like the way things were going on in our lives. Yet I thought we would never get separated. I would always say this to her, “Don’t develop feelings for anyone. It will create problems between us.  I cannot afford to lose you.”

After a while, I realized that she was hiding the truth from me. I started becoming jealous of her. Even at this stage, I thought that our relationship would not get affected. I believed that we had no problems between us. I felt we truly loved each other. I did not say a word about this to my roommate. I somehow could not be cruel to him. I understood how he felt about her too. But we started having more and more misunderstandings every day.

Things grew to such an extent that one day I ended up abusing her verbally while talking to her over the phone. I was angry with her. But I was drunk too.

My roommate was supposed to be my best friend in the entire college and he refused to leave her.

I knew I had hurt her with my words. I knew she had cried all night because she was deeply hurt by my behaviour. When I met her the next day I apologized to her but my “Sorry” somehow had no meaning in it.

I saw her face and realized that I had done something terribly wrong.

I was hurt too. I cried for the mistake that I had made. I promised myself that I would do everything to keep her happy. But we just ended up having more and more misunderstandings amongst ourselves.

One fine day we just broke up. I knew we all still had a lot of feelings for each other. I told her that we would remain only friends from now on. She too agreed to it. We still continued to fight over the same issue but not with the same intensity. We had learnt to laugh together too. Things were much better now than what they were earlier.

I experienced the worst day of my life when all of a sudden she just said that she did not love me anymore. She said she loved my roommate and they were in a relationship now. I was devastated.

I couldn’t see anything. I lost all my senses. I didn’t know where to go or what to do. I was hurt and felt like I was dying and there was nothing I could do about it.

I tried talking to her with the hope that I could get her back in my life. I cried in front of her but she was unmoved. She just stood still and watched me cry.

I was depressed that day. I could not sleep at night. I knew no one would help me out of this. I would see my roommate talking to her and visiting the same places that we went to earlier. They would sit, talk and hold hands with each other and it would kill me to see them doing this every day. I still had to live in the college for 2 more years.

I tried to move on with my life. I fought with my inner self every day. I regretted all the things that I had done earlier. I realized that I should not have done such things.

And at the end of it all, I had lost both my best friend and the love of my life. I know things will never get better between us now. I deeply regret abusing her that day. I also regret trusting my friend so much. She ended up backstabbing me. But maybe she did not expect me to abuse her like that when she loved me so much.

Life feels so good when we have a couple of good friends that we can always rely on in our lives. But over time we realize the value of being our own best friend too. Let’s share this young man’s story because sometimes friendship and love confuses us and causes us a lot of pain. Maybe we don’t really know what we want in our lives. But we realize what we are looking for only when we expose ourselves to such experiences.