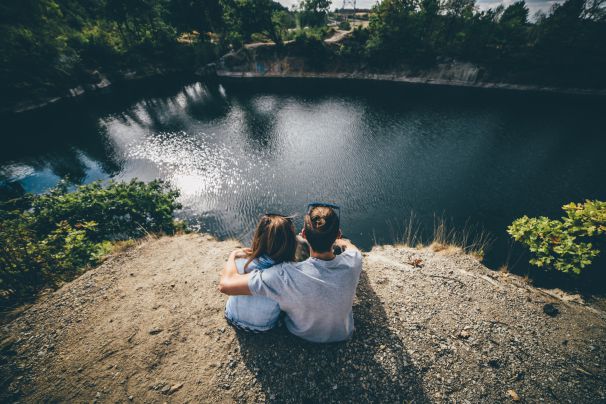 My uncle died abroad, and his body was brought to the village for burial. I was waiting and pacing the grounds of my village home, peering to see whether they were winding their way towards us via the bendy dirt roads. I went to the fences of my home, so I could see far as the eye could see. I heard a rustle behind me and jumped slightly, it was my second cousin. He was nearly my age and irritated me somewhat since he did not talk much but kept following me everywhere I went. He asked me what I was doing there. I replied that I was looking out for them. Then I brushed passed him hurriedly to go back to my house. He was following me again. I went straight to my room. He followed me there but stopped at my door. This irritated me some more, so I left my room to go the kitchen. He didn't follow me there but joined me about 10 minutes later. I left the kitchen and went to the yard, pacing again. I didn't realize until half an hour or so later that he was watching me from afar. This kind of freaked me out, and I wondered why he was doing this!

I noticed him smile at me when our eyes met. And I realized that he might be into me!

I started talking to him, asking him his hobbies and what class he was studying in, etc. He kept smiling and he was blushing so much, I felt flattered and thought to myself that he was kind of cute. We continued chatting at every opportunity we had till my dad arrived home with my uncle's body. After which I became occupied with mourning. Following the burial, he stayed at our house for another few days. I really enjoyed his company and our talks. He went back to his home and I returned to my routine. Since we were related, it was expected that we would meet up every now and again.

And so, we did. I really liked him and felt that our relationship may prosper in the future.

The above story is from our childhood when we were about 14/15 years of age. In our adulthood, we lost touch as we got busy with studies, growing up etc. However, after completing our studies we conversed again through Facebook. It was just as easy to talk to him, as it was when we were kids. He is such a great guy with a sweet and lovable personality.

I just wish that he had expressed his feelings earlier on, since we might've been able to make something of our relationship. But it wasn't meant to be.

I got married first and struggled a lot with my husband. It took a lot of effort to stay focused on him alone. I could not help wondering what could've been. During this time, I reminisced with my second cousin about the good times of our childhood. I had the urge to express more but fought it for the sake of my marriage.

Shortly after, he also got married. Unfortunately, his relationship did not last for more than a year.

I could not believe the girl he had chosen to be with. I had met her and was disappointed that somebody like him would have ended up with somebody like her. He deserved so much better! This affected him deeply. He was devastated that he couldn't make his relationship work. I initiated contact with him again and expressed my sorrow for his situation. Again, there were unspoken words between us that I felt but didn’t hear. I always wish him well even to this day and think of him fondly.

We are both in our mid 30s now. Life goes on. Life continues. But memories always remain embedded deeply within our hearts.

Share this story because we all wonder what it would have been like if bygones had not been bygones.