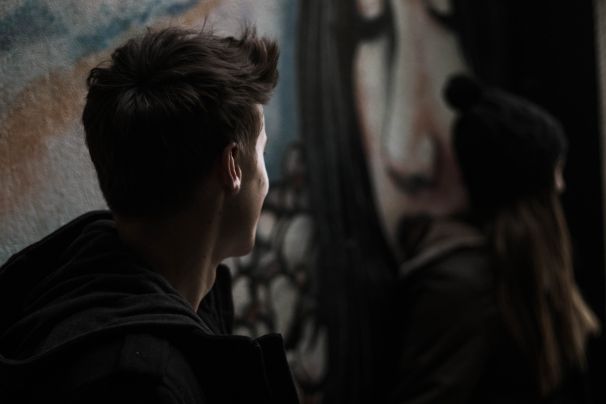 I was 21 when I passed out of college. I had just started working. I had tried to make friends with a few girls earlier but I had not been too lucky in my attempts. So I was still single. After working for a few months, I decided to support a girl child. I wanted to sponsor one girl child's education so that she could lead a good lifestyle.

I still remember the first time I saw her.

She was waiting for me in front of a Woodland store at Connaught Place. We met and decided to go to Café Coffee Day at Janpath. We started discussing the sponsorship plan which took care of a girl child's education. The meeting went well.

I found her to be an adorable person. I complimented her and told her that she was beautiful and soft-natured.

We were casually talking about the other general aspects of our lives when I ended up asking her about her age. She asked me to guess. I told her that she looked like she was 28 years old. She blushed and said, "No." After we had finished with all the formalities I insisted on knowing her age again. She told me she was 31.

But she looked pretty young for her age.

I followed up on the sponsorship procedure with her over several days. But my company failed to support me in this noble cause so I could not go ahead with my plan. But we continued to keep in touch. One fine day, we decided to end matters by meeting again once more. We met at Pizza Hut. When we were leaving the place, I just felt like holding her hand. I cannot describe that feeling in words.

It was such a pure touch. It filled me up with happiness and positivity. I ended up giving her a goodbye hug. It was the best hug that I had ever had with anyone so far. Our eyes met. We were not ready to leave each other's company.

I knew it was love at first sight for me.  I knew she too felt the same way about me. We ended up meeting frequently after this. She told me that she was in a relationship with another person for the past five years.

We decided to meet secretly so that we could nurture our love.

I started investigating about the person that she was involved with. It turned out that the guy she was in a relationship with - was already married and even had a baby girl. She was shattered when I told her these details about him.

I really took care of her and handled her like a baby for almost a year. I would cheer her up and make her look at her life positively.

By this time we had fallen in love with each other completely. We started having a great time together at nights. I still have a lot of memories about the time that we spent together.

Soon we realized that we had to decide about our future. I was 22 and she was a 32-year-old divorcee.  I asked her to give me a year's time to convince my family about our relationship. I knew that the society that we lived in would not accept our love. I also knew that I would have to be mentally strong to fight through this with my family.

But she was not willing to be a part of my future.

She was very clear that she did not want me to suffer in any way after I decided to marry her. I tried to convince her but she was not ready to compromise on this. I loved her with all my heart but decided to let go of her.

I wanted to ensure that she lead a stable life herself before I moved on with my own.

She deserved nothing but the best for her entire life. We started looking out for a guy for her. I helped her deal with several other aspects of her life too. My day would begin and end with her. Then one fine day she told me that her boss was a good guy and almost her age.

I decided to help her date him.

We decided on a place where they could meet and I helped her buy a gift for him. I wanted to help her out in every way so that they got to know each other very well. It was not easy to do all these things for her because I still loved her. But I still did it for her willingly.

I checked out the background of her boss and was satisfied to learn that he was indeed the best person for her. After meeting each other a couple of times they decided that they wanted to spend some time alone to check out if they were comfortable with each other. They would spend a few days in a hotel every now and then.

I then forced her to ask him whether he would accept her as his wife. He was decent enough to clearly say "No."

He knew his family would never accept her. Only I knew what I was undergoing at this time. It had been extremely difficult for me to move on from being her lover to just a friend now.

Things changed forever after that. She started hiding things from me and was not willing to meet me. I asked her to maintain a boss-employee relationship with her boss and continue working in her organization.

I don't really know how this ended up affecting our friendship. None of her friends wants to talk with me now. I still don't know why they are behaving in this manner with me. I wonder what she told them about me.

It took me 7 months to move on from this painful relationship. I almost lost my job and ended up ruining my personal life. It has been almost 2 years now. I still remember her. Each and every moment that I spent with her is still fresh in my memory. But after this experience, I am very scared of loving anyone else again.

Silence can often be sheer torture. We may wonder about what, where, when and why things went wrong for an eternity without getting any answers. Why Oh Why do we resort to this form of passive aggression? We may want to opt out of our relationships but we do owe our friends/partners an explanation. Do share this story if you too feel that such simple common courtesies need to be practised by all of us at all times.