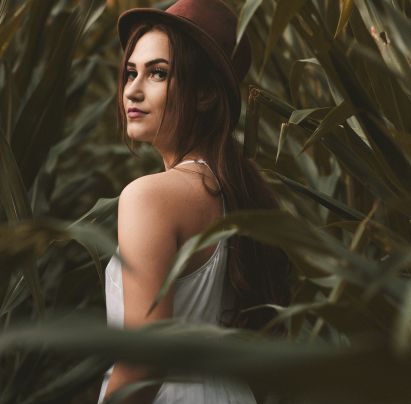 I have always loved being alone and independent. I made several genuine friends all through my life but I have never experienced stability in my relationships. Every time I fell in love with someone, he would break up with me when he saw the depth of honesty in my love.

When I was doing my graduation and post graduation, I would look at all the happy couples and see them pampering each other. Sometimes I would wonder if there was something that I lacked. But I made phenomenal progress in my career. I was a headstrong woman who believed in beating the odds to succeed. Professionally, I knew where I wanted to be in the next 10 years. Two years back, I realized that I had created a stable career for myself. I was quite successful in what I was doing.

But deep inside - I felt lonely. All my past relationships had faded out of my life. I had experienced nothing but betrayal and despair in those relationships.

I was still very hopeful about my personal life. I remained true to myself. I knew I was a fun person to be with.

Then sometimes I would wonder if I was clinging to false hopes. I would have doubts about whether I could ever share a loving relationship with someone and meet ‘the one’ destined for me. At such times, I just continued to be brave. They say, ‘You are the bravest when you decide to love again.’

And then I met him.

We decided to meet up. We planned to go on a trip and have a good time too. When we started talking, we discovered that we shared a very deep connection. We had similar broken pasts, similar ideologies, similar mindsets and above all a fair amount of attraction for each other. We were really excited and eager to meet each other.

Finally the day we had decided to go on that trip together arrived. I clearly remember going to the washroom the minute my flight landed.

I wanted to look attractive.

I highlighted my eyes with some eyeliner and mascara. My heart was thumping because I was just seconds away from seeing him for the first time.

We had planned to be together for the next 50 hours or so. We wanted to explore the city thoroughly. But could we connect to each other? We knew the answer to that question within a few hours of meeting each other.

We appreciated the fact that we got along so well immediately.

I knew most couples struggled to experience this kind of rapport even after years of courting each other. After spending a few hours with each other, we knew that there was nothing left – to be discussed or shared. We were oblivious to the world and rejoiced in each other’s company.

Every moment that we shared was precious.

We confessed that we liked each other a lot. Things were looking more than good to me. I remember bursting into tears of joy when we went out clubbing.

I knew that my time had come and that ‘love’ had arrived in my life. All the bitter experiences of my past became a series of dots now. I could make the connection beautifully now because they had brought me to this present moment when I was meeting him and appreciating him so much.

Soon, it was time for me to leave the city and him too. I did not feel hurt about it. It was quite obvious to both of us that we were really into each other. I was confident that this would work or that at least we could take it ahead with conviction.

But I chose to discuss things with him.

He then told me that I resembled his ex to a great extent. He said I had the same kind of smile, talked like her and even had the same ideologies. He then said that even the way I smelt reminded him of her and the times they had shared in the past.

I crashed for a moment.

Those precious moments that seemed most memorable to me had reminded him of his past. He then told me that it had nothing to do with my personality. But I came back to my city with a heart full of tears. I also realized that I had fallen in love with him.

I loved his honesty and the way he had treated me when I was with him. So I decided to give him some time and space. I waited for him because I wanted him to think it over.

I was confident that all his painful memories would fade with time and he would be able to sense the love that I had for him.

I wanted to give this relationship a shot because he was a genuine person and I knew he liked me too.

But it was not as easy as it looked. It was not easy to pretend to be friends with a person you loved with all your heart. It is a very daunting task to do this indeed. I wondered about the gold medal that I had won for dramatics while I was doing my graduation.

Sadly, when it came to real life, I could not even pretend to be friends with him when I actually loved him so much.

We had connected with each other at various levels. Maybe that is why pretending to be friends seemed like a petty game that we indulged in. I knew I had to be patient with him. I forced myself to be positive about the whole thing. I stopped making assumptions about him. I stopped checking out other men at posh clubs.

I changed myself completely to ensure that he was comfortable with our relationship. I ensured that he got all the space that he wanted. I knew I would pass the litmus test of 'love' with over 98% if he was the 'love of my life'.

So we continued to converse about general topics. That would give me some kind of hope about our future. It would also give me the strength to be patient with him. I did not even consider the possibility of him moving away from me. Sometimes I felt he was stupid because he was unable to see how much I loved him.

Three months later, I met with a minor accident and ended up with a head injury. I had to report for work despite this because I had to attend a critical call. My head was hammering with pain and it was on this day that I received a long message from him saying, “Hey, I know you are angry because I haven’t been responding to your messages properly. I heard that my ex is getting married and this had affected me a lot. I avoided talking to you because you remind me of her- a lot.”

We had met 90 days back. Our whole saga had started at that time and here he was still brooding over the same problem and singing the same song again.

Maybe it was my head injury that had knocked some sense into my head. I started seeing the truth now. It was obvious that he was just finding reasons to avoid me.

I had tried getting in touch with him again after 15 days. I had offered to be his friend and had genuinely wanted to help him get through the whole thing. But he had declined my friendship too for the same reason – "You remind me of my ex."

It was then that I realized that he had not even considered me as another human being. I was only an entity who resembled his ex and he had derived some joy from the physical relationship that we had shared.

Now I realized what people meant when they said that ‘Love can hit you like a dagger.’ For several days, I felt a bitter pain in my chest. I cried for a while. Sometimes I would suddenly be plagued by those wonderful memories of the time that we had shared together and suddenly I would find myself blinking back the tears in my eyes. I would swallow my tears with great difficulty and then take a call from my client. I would then give it my best shot despite the pain that I was experiencing personally.

But this entire experience had transformed me as a person. I realized what love actually was. I realized how precious my love for him was. I learnt to be kind in love. I knew that love empowered me and this kind of love could change the other person’s life forever. I learnt to be hopeful for no reason at all. I was grateful for having so many friends and well-wishers around me.

Do I still love him? Yes. Will I go back to him if he returns? No. Am I scared of falling in love again? Yes. Do I smile less often now? Yes. Will I love someone again that way? Maybe not.

But what I surely know is this: I will ensure that the person who loves me is not treated the way I was treated. I will make sure that they get to see the best version of me.

It hurts when a person is unable to perceive the love that we have for them.  But let’s learn to look past our own pain. Let’s be sensitive to the emotions of people who don’t love us. Maybe there is no point in holding on to a relationship. But let’s at least learn to let go after doing our best to understand the person we once loved. Let’s all share this story and try this out in all our relationships.