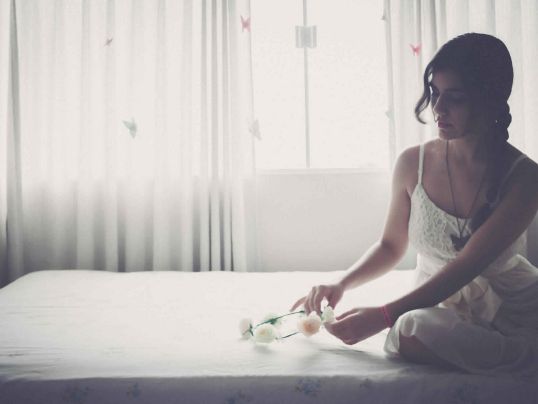 I was studying in grade 2 in Oman when my father’s friend brought his family to our house for the first time. He had two sons. One was a boy of my age and the other one was younger than me.

I was a shy girl at that time. I was surprised to see that he too felt shy to talk to me.

He then joined our school so we started meeting each other every day. My best friend became his friend. Both of us ended up in the same class when we were in grade 3. One day I was really disturbed to see that he was absent. That evening, his father came to our house and asked me to write down all the notes for him because he had fractured his hand. I wrote down all the notes for him for 3 months.

After that, I realized that I would always get disturbed when he was not present in the class.

We studied together till grade 8. It was at this time that he again remained absent for 2 weeks. There was absolutely no news about him that time. I then came to know that his father was not keeping well so they had gone back to India.

I felt very sad when I heard this. I just couldn’t understand why I became so emotional when something went wrong in his life.

A few months later when I was in grade 9 one of our neighbours informed us that his father had passed away. I felt so sad when I heard this that I cried like hell in the school toilet.

I knew he must be feeling very bad. I just wanted to tell him not to worry about things. But I couldn’t tell him anything at all.

I was now a teenager and unlike other girls and boys, I never fell in love with anyone else.

Instead, I would always feel as if someone else was waiting for me.

He had left Oman more than a year back and almost everyone had forgotten about him. But I would be haunted by his memories every now and then.

I realized that I loved him.

I tried to get more details about him. I dreamt about him and even in my dreams, I would see both of us together.

I knew I had started obsessing about him.

Unfortunately, my father lost all his money in his business. Creditors would come to our house and start shouting. We couldn’t afford my school fees too. So I thought of taking up a job after finishing my high school. Despite all these problems I knew that the love that I had for him was at its peak. I was in grade 11 now and had started using Facebook. From the very first day, I started searching for him on Facebook. But I couldn't find him.

One day I was standing in a temple. I had completed my high school and suddenly I just felt that things in my life would change after I met him and got a job.

When I went back home, I started browsing through my Facebook page and suddenly I caught sight of his face. I went mad with happiness. I ran all around our house with delight. I felt as if I was on top of the world.

I sent him a friend request and spent a sleepless night because I was worried about whether he would remember me.

I got a notification from him the very next day saying that he had accepted my request. We chatted for hours that day.

I realized that I was totally mad about him. I would get disturbed even if he coughed. I had unknowingly started caring for him and felt as if he was my child. He too shared all his secrets with me.

One day my mother came to know how I felt about him. I openly told her everything that day. She told me that she would have allowed me to marry him if he belonged to our district. I had heard of religious barriers before. I knew that sometimes even the country that we lived in proved to be a barrier to a marriage. But this was the first time I was hearing about a district being a barrier.

I tried my best to convince her about the immense love that I felt for him but in vain.

Next day, he called me and confessed his love for me. I really wanted to say that I loved him too. I wanted to hug him tightly.

I wanted him to know that I didn’t want him to go away from me again. But I couldn’t.

Instead, I just said, "No" to him. He asked me to be his friend for some time. He said that I too would start loving him after a while. But he didn’t really know the truth…he didn’t know that I loved him more than the world.

After a few months, he asked me whether my feelings for him had changed. I said, "No" but said that if he blocked me I would commit suicide. I knew I was hurting him with my words. So I tried to move away from him slowly. I stopped chatting with him and did not call him every day now.

I then deliberately reduced it to monthly chats.

We have now almost stopped talking to each other. But his memories haunt me all the time.

I still think that he is the only person who will stay in my heart forever. Sometimes I call out for his name in my sleep. I am sure I cannot love anyone else in my life. I believe that God wants us to be together. I feel He will not separate us. I often feel that we may have been together in our past life.

Often the faith that we have in our love/prayers and in ourselves create miracles in our lives. Let’s share this mature girl’s story because she has created such a beautiful perspective of love in her heart. Let’s learn to nurture the loveliness of love in our hearts from her. Life will take its own course in all our lives but when we deal with our love in the right manner we can create a beautiful difference in our lives.