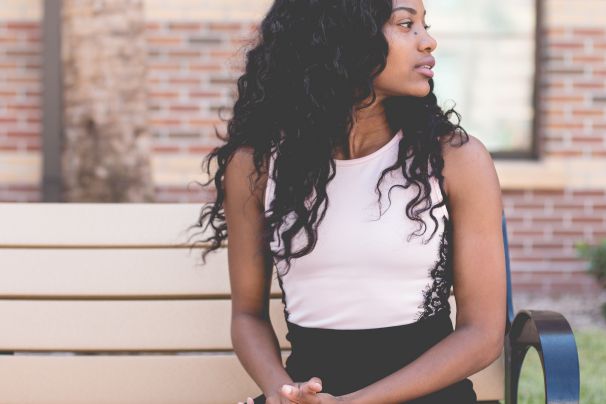 There he was – tall (and by tall I mean 6'2" – seriously), fair and handsome, in his blue denim. He came towards me and smiled as we shook hands. I quickly glanced at him. I realized that yesterday had been the first (and perhaps the last night) when we had talked to each other over the phone. Of course, I was looking and feeling terrible that day because it was not a pre-planned date. I was not even mentally prepared for it.

I then took him to the private ward where I was waiting for my turn. While we were going there, I told him that I was there to meet my psychiatrist. I hadn’t told him about this earlier. He knew I had to go to the hospital after my class but he didn’t know the reason for it. As expected, he was shocked but he didn’t ask me anything much about it. I thought he would just drop me back home and then leave forever.

But after my counselling session, he took me to a bar where we both spent some quality time together. I was surprised when he cancelled all his classes just to spend time with me.

He was a CS intern and a tutor. He dropped me back home. I was happy. Who wouldn’t be when you had such a perfect unplanned date? I got his texts again on Instagram the same night. He had approached me for the first time just three days ago. The text read, “I loved your company and I am looking forward to spending more of my time with you.” I replied with a text which said, “Same here.” This was totally unexpected.

He called me again in the night and we talked for 5 hours just like last night. It all seemed so beautiful. An imperfect girl like me had got a perfect guy.

Did I tell you that he had proposed to me that night? It was still too early and after being betrayed twice, I knew I had to stay away from him as much as I could.

But life never works out the way we want it to. Destiny has its own plans to f*** your life.

He talked to me every single minute of the day. Even if he had just 5 minutes between 2 classes, he would call me. I knew all these were just tactics to get a girl. So I never got influenced by his gestures. But as I said, life is a b**ch. Now, he picked me up from my place and dropped me to my classes despite his busy schedule.

One day, out of nowhere, he caught me by surprise. He cancelled his classes again to spend time with me. I was happy. Who wouldn’t be? Someone was going out of the way to give me everything that I had ever wanted. I knew Kunal was a person who would never judge me.

It did not matter to him that I had a thin size or had curly hair or that I had pimples all over my face. I knew he was a person with whom I could just be myself. I did not have to show off or do anything else for that matter.

I was falling in love again thought I had broken up with someone else just a month back. I knew I was going to destroy myself again but this time I knew it was all going to be worth it. He proposed to me and said he wanted to marry me. I did not give him an answer but he already knew what it would be. His mother, his sister and all his close friends knew about me. It was as if all my dreams were going to come true now.

Somewhere deep down, I knew that it would all end some day and he too would change - like the other two before him. I expressed all my fears to him. But he accepted me the way I was.

He promised to be there for me always but we all know that promises are meant to be broken. He changed.

Yes, I was a bit insecure and possessive because of my old relationships. He knew everything but still ignored me. He blamed me for everything. He started lying, hiding things and ignoring me. Earlier this guy couldn't wait to talk to me. He used to apologize even when it was not his mistake. But now he was doing everything to let go of me.

Somewhere, deep down I felt it was my mistake. Maybe I had provoked him with all my texts and calls.

I thought I had been annoying and blamed myself for all this. I knew I shouldn’t beg him for anything. But at the same time, I didn’t want to lose him too. I was in love with him and at some point, I knew that even he did not want things to end between us. So I did everything I could to save this relationship. But one-sided efforts never work out. He did not answer my calls or reply to my texts.

On the eve of Diwali, I got a text from him which said, “It’s over.” I had tears in my eyes. I couldn’t help myself. I cried for hours and this year I was not at all happy on Diwali. I asked him to give me a reason. I called him and pinged him everywhere. But I did not get any answers. He has not given me a reason as yet. I don’t know whether this happened because there is someone else in his life or because he no longer lusted after me.

He had asked me to give him some space. I gave it to him thinking that he seriously needed it and hoped he would come back to me later. But days and nights just seem to be passing by and I am losing all hope now.

I haven't given up on him as yet but I know I will have to do so someday.

They say that ‘Those who truly love you don’t ever leave you – no matter what.’ Maybe I am immature or innocent or childish – you can give it any name that you want to – but that statement was true from my side at least.

You taught me another lesson. Now I will not love anyone again. I won’t trust anyone now. I wanted to talk to you one last time so that I could tell you all that I always wanted to tell you. I miss you Kunal.

I know none of my wishes will ever come true. I know that we won’t be together anymore but I just want you to know that I was happy. I wanted us to last but your infinity ended in just 53 days.

I don’t hate you. I would never. But I wish I could just hug you at least once. I wish I knew the reason. I wish I knew my mistake. I wish for once that you had proved your words to me. But you just left me to deal with my pain and my tears.  I love you. Take care.

We are all worthy of love. So let’s learn not to question our sense of self-worth when we are disillusioned by love. All we have to do is just get up, brush our past out of our lives and work towards creating a beautiful world of our own. No one else will matter for a long while. That’s perfectly fine. In time, when we have healed completely, we will surely include others in our world. Let's share this touching story and adorn her face with a beatific smile.