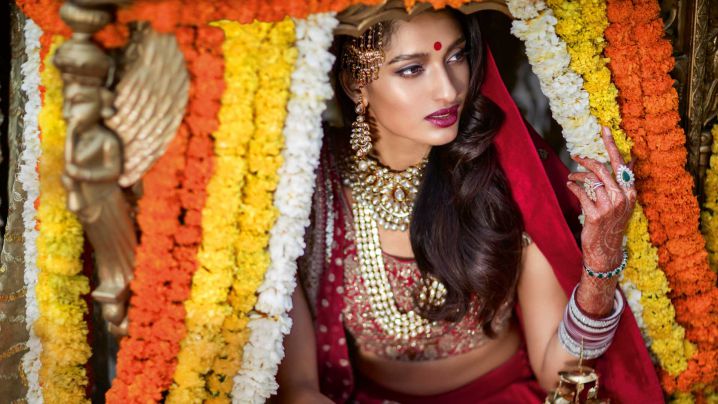 They were about to take the seven ceremonial rounds around the holy fire. Her marriage was a grand affair. But it also doubled up as a perfect place for our reunion. Most of us were meeting after years and the air was filled with nostalgia.

Old jokes were tossed around and we were reliving our forgotten memories. I enjoyed it all. It even rejuvenated me. But I could not stop the anguish and the hopelessness that was clogging me from inside.

I had a smile on my face. It helped me mask my bleeding heart. After all, it is not easy to see the one you loved choose someone else. It is like homicide. But at the end of the day, I cannot really blame anyone. I am the victim and I am the culprit of my love story.

People walked towards the soon-to-be-married couple with flowers in their hands. I excused myself pretending that I was not well. I wasn’t lying either. The pain was, however, more emotional than physical.

A small bar was set up in the corner. I could view the place where the ceremonies were going on from there perfectly.  I stacked up seven glasses of wine on the deck. One for each ceremonial round.

Love can fuel our desires and fill us with hope. Love can also dash our hopes to smithereens. Love can give us a sea of solace. But love can also be like a mirage. It looks like an oasis in the middle of a desert.

The bride and the groom stood up to take the rounds. I grabbed my first glass. I swallowed it in a single gulp. I waited eagerly for the wine to take over my senses. My emotions engulfed me.

I closed my eyes and took a trip down memory lane. I went back to the year when we had first met each other. We were immature and young in terms of worldly experience. We were naïve to be precise.

It was a huge disadvantage that I was an introvert. I lived in a shell of my own and was concerned only about myself. I was scared of being misunderstood and this made me talk even lesser. I would describe myself as a silent mess.

She was my exact opposite. She was outspoken and bursting with energy. Her eyes had a kind of depth that was worth drowning in. Her smile was so warm that they could melt the hardest of hearts. Her lips held conversations that could engage a person for hours.

Every time I saw that beautiful face, I wanted to break free of all my self- created restraints. Her enchanting smile was more intoxicating than the finest wine. I started breaking free from the cocoon that I had created. I truly felt that I could drown myself in her oceanic beauty.

Love and hate have one thing in common. Both serve as stepping stones for a bond of friendship.

Our conversations gradually grew longer. We shared all our good and bad things with each other. She complemented me perfectly.

She was the soothing music to my coarse silence.

The human mind is like an unbridled horse. It wanders in all directions.

I imagined that what we shared was more than just a bond of friendship. I spent anxious sleepless nights where I deluded myself. I was unable to read her mind and heart and this made things more complex.

The moot question was whether the feeling was mutual or not.

Every time I decided to speak to her about my feelings, my heart held me back. I was scared of destroying what we had built. And just when I decided to break free of myself imposed shackles, I ran out of time.

She moved out to pursue higher studies. We still talked and my heart skipped a beat every time my phone flashed her name. My desire to be with her did not die.

Hope can prove to be a lethal drug. It blinds you to reality. But fate is no less than a sorcerer.

Within a short span of time, I landed up in the same city. I did not know that it would end in this way. Our conversations died a slow death. My mind resisted all this even if it meant waiting for hours for her monosyllabic reply. I was happy because I expected to meet her sometime but all I always got was blunt excuses.

Life changed our dialogue into a monologue. The truth was that she had flowed with time while I was stagnating in the past.

I hooked myself to an unwanted addiction. Every time I tried to control my heart, false hopes threw a veil over my senses. It was as if I was hallucinating all the time.

She was with someone else now. I could not bear to even visualize that she would be with another person in the places that I had always dreamt about. Such thoughts punched me from inside. Her enchanting mystical aura haunted me now.

All I could do was to scroll down without liking any of those pictures on my Facebook wall.

I wanted to run. I wanted to hide. My unsaid words became a burden to me now.

I felt as if they were crushing me under their weight every day. I decided to make one last call.It was midnight - a time when one is supposed to be most vulnerable and transparent. I mustered a lot of courage and called her up.

I felt as if I was a drowning man who could finally gasp for air when I heard her melodious voice. We exchanged pleasantries.

I was longing for an end. I blurted out all the feelings that I had bottled up within me for all these years.

When I finally ran out of words, my eyes were shedding copious tears. This time I did not care about our relationship. I had expected this silence. I had always expected her ‘No.’ I was finally free of my past. This time, time did not play any bewildering tricks on me. I got whatever I had been expecting.

How could I hate her for the reasons that she had given me? She had sensed what I was feeling for her intuitively and instinctively. She could have at least come forward once and freed me from the illusions that bound me to her. Instead of doing that she let me rot there with my faded memories.

I waited for so many years with the hope that she would say ‘Yes’. She could have finished it with a simple ‘No.’

Maybe I am responsible for my own predicament but she always had the key to my happiness. I never turned into a stalker who bugged her. I chose instead to be a passionate lover. Maybe she could have just turned back once and tried to understand me. Maybe I should have simply stepped back earlier instead of allowing myself to get tormented like this. I just decided to turn the page of my life that night. One could come to any conclusion based on what one believed in.

But I was relieved that at least the ship of pretentions had left the coast for good.

Wounds do heal. But the scars remain. I forgot every chapter that involved her until I received the invitation card. She was getting married. At least she had thought of me. The context did not matter. I was quite confused. I brushed aside my thoughts and decided to attend the wedding. I did not want to refresh the wounds again. I decided to go. Yes, I decided to go wearing a smile.

I was obviously high by now.

They had completed taking all the seven rounds. The glasses were empty now. My vision was blurred because I was intoxicated. Yet, I could clearly see her face. She was ready to leave now. The rituals were over. An old friend came running to me and helped me reach the other end. She came close and met all of us before entering the new phase of her life.

I thought I had no feelings for her and I would not get hurt. I tried my best to control myself but my tears betrayed me. Her beauty still had the power to melt me. I waved and smiled back at her when she left me. I did the same now too.

How can you hate a person you loved with all your heart?

Love is about sacrifice. Not all friendships can be seen from the same perspective. It took me a long time to understand this. They say that our destiny is already written. Maybe we were not meant for each other. I wish her a happy life every time I think of her.

We all have a very peculiar tendency of being our worst critics. Let’s do ourselves a big favour and learn to love and accept ourselves the way we are. Yes, we need to grow and deal with the blows of life in a mature manner too – but that can happen only with experience. Do share this sensitive and mature man’s story because we can all learn from the many profound insights that he shares with us.