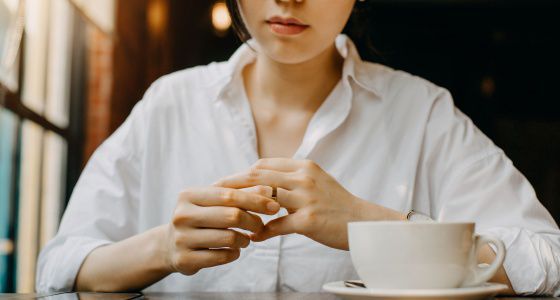 We have 10 years difference between us. My "husband" is a great soul, he helps others, he is ready to stand for his friends. We are not financially great. We are a middle-class family with loans. Our relationship is kind of different than others.

I got married to him when I was 21. I was a normal girl full of hopes, but he was a matured, practical man. I think I still don't understand him. He doesn't like to hold hands in public, or call me by any pet name, or go to a park or temple. But he never stopped me from going, but sometimes he used to take me for movie or drinks.

He needed his privacy, he needed his own time, but I am by nature a chipku girl from the village. He taught me how to become bold, how to dress up, how to behave in parties. You know what? Even he taught how me to drink, which I never did before. I learnt everything, even English. I stared working. My in-laws and husband wanted me to work. All of this was to make sure he could live the life he wanted. And he did set a lot of high standards for me.

Sometimes, if I spoke wrong English or argued about something when I didn't know much about it (especially in front of his friends), I would get shouted at. So I mostly kept quiet. His friends were elder to me and they were more knowledgeable. They would talk about their car businesses. And if I ever had to speak extensively about anything- it's family. In these gatherings, I would always feel bored or left out, but I would still go because I'm the wife.

He would keep secrets from me. And then he'd urge me to be independent. If I ever got angry and stopped eating, he'd ask me to eat once or twice. But he would never try to push or convince me. How he sees it- he asked and I said no. But I always wanted him to sit next to me, give me a hug. That never happened.

I am the third child in my family and they always used to pamper me. But the way my husband behaved with me is very strange. He never stopped me from doing anything. He gave me all kinds of freedom. I could even go out late to a party just as long as I made sure I'm safe. He had no selfishness and no possessiveness. So much so that he wouldn't pick me up from anywhere. He'd ask me to get a cab instead and he would say, "You're not a kid".

One day my friend needed money in the middle of the night. It was an emergency. Without asking questions, my husband gave the money. I respect him for it and I even returned the money.

There's no doubt that he's an open-minded guy. But I just want a husband who is slightly possessive and pampers me. My husband is not a bad guy. Whenever I ask money, he gives; whenever I say I want to go for a party or trip, he allows me; he never asks me to work at home, he never asks me to help his mom.

Surprisingly, he changed my dressing style from 'champi' to a modern lady. He never says no to any kind of dress. I feel uncomfortable to wear some things in front of my in-laws, and he always makes sure I understand which dresses make sense according to place and function, and I guess he is right. We have never gone for a walk or a trip as a couple. Sometimes we have gone for dinner and drinks when he doesn't have friends to accompany him, but he takes me for all the trips and parties with his friends, and our physical relationship is not great, since he is busy with friends, party, and work.

He never checked my phone (but I do). One day, I got to know that he has relationships with other girls. I asked him about this but he never told me the truth. He said, "Don't interfere in my private life. I have given you everything that you want, just go and see other people's wives. They cook and clean the whole day, but I don't ask you to do anything. I've never asked you whom you speak with or go out with. So, don't ask me."

It's been 9 years now and our life is going on like this only. In the lockdown also he is busy in his own world, and I am busy in another. We don't have sex even once a month. If I'm upset about it, he says "I'm not the guy for you. You can find your dream guy and get a life. I will not cry. Life should go on. If you even want to marry someone else, I'll arrange it for you."

I wonder if he loves me or not. I once told him that his girlfriends make me uncomfortable. I asked him to leave them. But he refused. He said that's how he leads his life. He said that he married me because he loves me, and he will always take care of me and the family. The thing is, he's a great care-taker. He's as responsible as a parent. But that's not how a husband is, right? When I see other couples on social media, their idea of romance doesn't fit in my head, and unsurprisingly, my husband thinks they're too dramatic.

When my dad passed away, he just booked my tickets to my place and said, "I know you are strong. You can handle it alone. I can't leave and come with you. I had no option but to go alone. One of his friend's mom said to me, "He is giving you life and everything you want. Guys have thousands of things to do, so stop complaining about him".

But my dream was about being with a caring, sharing person, who doesn't keep secrets, but shares everything with me, feel a little possessive about me, act cute, make fun, be romantic. Once he reaches home, he could just give me a hug, ask me to prepare something for him, cry with me and laugh with me. I still don't understand which is right and which is wrong. Sometimes my physical needs also ask me these questions.

Maybe it's time for us to take a second look at what a loving relationship needs to be. We grew up learning some version of what an ideal marriage should be. If we had all the rights to make our own rules, how would that marriage look like?