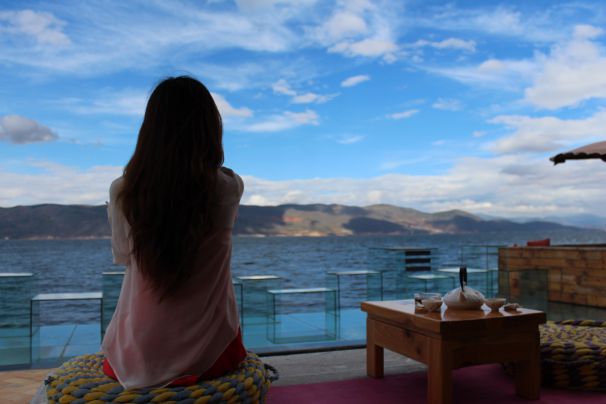 Ours was a typical filmy love story which started on Bus No. 81.

I was going through a heartbreak at the time, that was my first relationship and I was in my first year. My summer vacation was going on and I decided to take up a summer job, just to keep myself occupied from the ache I was going through. One morning while I was standing in the queue for my bus, I saw a tall, dark and handsome guy standing around. Of course, it wasn’t “love at first sight”, especially because of my previous relationship, which at the time, I definitely knew that he was my first love.

This guy and I, we used to travel on the same bus, almost every single day and once he even helped me get on to the bus when it was crowded. He protected me and him doing this, it still makes me smile. From then on, we began exchanging pleasantries from then onwards. Unfortunately, one day, I injured myself at work and so had to stay at home, complete bed rest for a long while. I almost lost hope of ever seeing this guy again. During this time, a colleague of mine was trying to set me up with a friend of hers. I tried to be polite about this whole situation and ended up telling her that I was totally into “my bus guy”.

Time flew by and after a long time, I was ready to get back to work. Sadly, “bus guy” wasn’t traveling with me that morning. I had gotten used to seeing his warm, innocent smile, as I began my day. In some way, I was destined to meet him, however I didn’t know it at the time.

That morning, when I reached office, that same colleague who was trying to set me up earlier, was eagerly waiting to share some good news. When she told the boy she was trying to set me up with, that I was interested in someone else, they ended up doing a little bit of Facebook stalking and it turns out, they were friends! And just as I shared my story with my colleague, he had told his friend the same thing, about me. Oh, and the cherry on top, he was eagerly waiting to set us up. Although I wasn’t ready to be in a relationship right now, I can’t lie, I was keen to meet him.

A date was decided and get this- as I went home that night, he was on my bus! The whole way through, we just kept glancing at each other and smiling nervously. His eyes were on me the entire time and I knew that I was a bright, bright shade of red myself. Before we could meet, his friend (who soon became mine too) asked me if he could share my number with him. I said yes. We started talking to each other even more and realized that we should meet, sooner than we had planned.

From the first day, he told me that he had already began thinking about me being someone special in his life, but I made everything clear to him on our very first date. That I can’t be more than friends with him, and that I was still in love with my ex. He said that it was alright, he was ready to be my friend if that’s what I needed right now.

Our friendship grew strong, day by day. He became my shoulder to cry on, my confidante and someone who made me laugh harder than I ever had before. He loved me unconditionally and never stopped showing me this. A few conversations later, he told me that it was love at first sight.

I fell in love with him. Head over heels. He made me believe in love once again and loved me to an extent that I never thought was possible. He was my whole world, and I, his. I’ve never been loved like this by anyone before, not even my family. No matter what, I’ve always craved his attention, and he’s enjoyed giving it to me.

In this time, he went abroad, for work. But before he left, he came over and spoke to my parents about our future. My parents were against our marriage since he’s from a village while we are “city folks”. Our caste, our culture, almost everything about is drastically different. So they were sceptical about us being together forever. Still, we didn’t lose hope and I wasn’t ready to lose him, at any cost. And this made my parents say yes. But sadly, my dad passed away, before I could get officially engaged, and he was still abroad. Finally, after a lot of hurdles in our relationship, he came back and our marriage date was set.

It was fixed for October 2015. And that’s when my beautiful, filmy love story turned into a nightmare; the second I became his wife.

Overnight, it felt like he just wasn’t the same guy I’ve known for over three years now. I felt like he didn’t love me anymore. We never got any privacy at his home and he didn’t seem to be too concerned about this. We began fighting for absolutely no reasons, even on our first night. Every single night since our wedding, I’ve gone to sleep in tears. He wasn’t interested in making love to me, or even take me out for dinner or a movie. Days went by and I always felt like this mother and sister were trying to do everything in their capacity to tear us apart. I hate to say this, but they succeeded.

They were great to me, to my face, but would always say horrible things about me to him, behind my back. This would result in him getting aggressive with me, day by day. Even though everyone would tell them that they were lucky to have a daughter-in-law like me, but they didn’t seem to think so. Six months into our marriage, not a single day went by when we didn’t fight.

I was mentally tortured and used to feel physically sick to be a part of that family. But this was now a routine for us. We would fight and he would sleep on either side of the bed. He’s even slapped me twice and held my neck tightly. He’s even abused me in front of my mother once but I loved him. He was the one person who loved me more than my own parents at one point in my life. So, I convinced myself to stay with him. I truly believed that my love would change him and he’d see me as he once used to.

Slowly, I began losing confidence in him and I began living cautiously in his house. I couldn’t even call it my own.

He was a complete strange to me, no more was he the “bus guy” that used to make me blush with only his eyes. I was suddenly his servant. Just around to clean up after him and feed him. His family never considered me as one of them and for all decisions related to us, I had no opinion or say. No one would even speak to me unless they needed me to do something for them. They stole all my confidence from me.

There were days when I would burst into tears and scream, ask him how and why I’ve just become a servant for his family, but he didn’t care. I left my family for him, I fought with them for him, I felt everything I was or wanted to be, for him and all he had to do was make me a part of his life. Extend his family out to me. But all I got was torture.

I’m writing this, after I tried to commit suicide and unfortunately, survived.

We got a divorce on the 11th of this month. And no, it wasn’t my decision. He is the one who decided that he doesn’t want to be with me. In fact, he never did. I was a show-prize, like an expensive cow from the city, that he wanted to flaunt in front of his village.

I didn’t fight the divorce or try to convince him that we should give us a shot.

I still have our pictures, from when we were best friends on my phone. It’s a memory that I will always cherish and keep saved in my heart, forever.

Share this story, because while all love stories don't have happy endings, that doesn't mean one should give up hope, or their life.