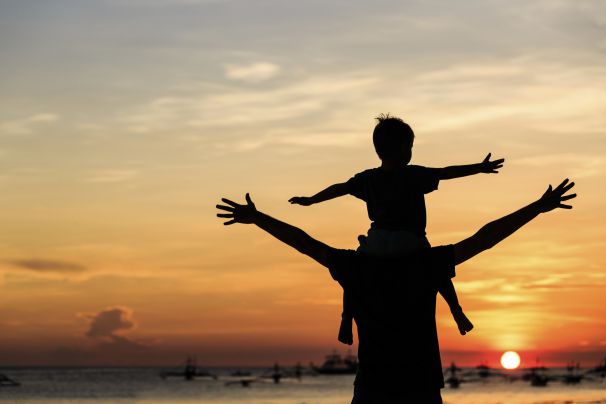 I am 26 years old now. My father passed away 21 years ago. I was only 5 at that time and too young to understand what was happening around me. I did not know how this ultimate loss would affect me all through my life. He died of cancer. But I do remember my elder brothers telling me that he had gone to God when I asked them innocent questions about where my father was.

I still remember my eldest brother taking care of me during the funeral ceremony. I remember sitting on his lap and asking him why my father was not attending it. His reply was, “Father is sick. That is why he is not here Beta.”

I remember chanting, “Ram Naam Satya Hai” quite often for several days after my father passed away. I must have heard this during the funeral ceremony. Perhaps the lines stuck with me. At that time I didn’t know that these lines were chanted only during the funeral ceremony and that we should not use it when things are normal. My mother would get irritated when I used these words. She would scold me and ask me to stop using that phrase.

I also remember that I refused to go to school for almost over six months after that. I had a teacher who always told me that my father was no more.

She would tell me that he was dead. It was difficult for me to accept this. After all, I was still a child back then. The other children in my class would bring this to my notice and brag that they still had their own fathers around them.

I don’t remember how I reacted to such things. But I remember that I stopped going to school after this. My uncle (father’s younger brother) came to know about this. So he met that teacher and discussed the matter with her. But I still refused to go to school. My uncle then had to forcibly send me to school. He constantly assured me that such things would not happen again. Thanks to him, I am in the final year of my CA now. The teacher who was troubling me had changed. I never had to face her again. I was promoted to the first standard and was relieved that I did not have to face that particular teacher again. But a similar incident happened again.

It was then that it finally dawned on me that my father had definitely gone away somewhere and would never return.

I was playing with a friend. I still remember her name. It was Babita. While playing she asked me where my father was. I still believed that he had gone somewhere and would return. When I told her this, she said, “No, he is dead. He is not going to return.” I got annoyed and screamed at her. I suppose it is natural for a child to flaunt his/her possessions, especially when it is something that the other child does not have. Maybe it was just an innocent manifestation of their parents’ greedy nature. I don’t know. But coming back to the point, she became more adamant when I screamed at her.

She continuously told me that she had a father while I didn’t have one. I remember screaming at her very furiously.

I will tell you what I remember about him. I remember the mango bite chocolate that he used to bring just for me. I remember that I had gone searching for it in his pocket one day. I thought he was not around at that time. He came up from behind, picked me up and laughingly asked, “Jaglo, shu kare che?” ( “Jaglo, what are you doing?”) ‘Jaglo’ is my pet name. He then picked me up in his arms and gave me that mango bite chocolate himself. I still cherish this memory.

All I want to say here now is that I miss you, Papa. I miss you so much. I don’t know if you miss me from wherever you are now. But I miss you. I miss the hugs and the care that I would have got from both Mom and you. Yes, I miss it from Mom too.

After you passed away, Mom became so busy playing your role that she forgot to hug us.  You can’t blame her Papa. She was doing her best to fit into the roles that she had never played before.

Somewhere amidst all this, I unknowingly skipped through my childhood, Papa. I behaved like a grown-up boy at the tender age of 9 and started taking care of the family. This would have never happened if you had still been here. I miss you for that too Papa.

Somewhere I still need you around me. I need you now. I miss your presence in my life.  I am going through hell. I need your touch, your care and your support. I am badly hurt, Papa. Sometimes when I am not able to control myself, I even hit myself, Papa. I am scared of myself. I need you here. I miss you. I know you can’t come. But….I don’t know. I miss you, Papa.

Sometimes, life makes absolutely no sense to us. We miss a person so badly that it hurts. We do grapple with the challenges of our life but we can also sense a higher guiding force around us.  Sometimes we find our loved one in the love that other people shower on us. At other times a flash of insight makes us realize that perhaps God blesses different people differently. Come now; let’s share this story so that this young man gets ALL the love that he is looking for.

LIFE IN THE TIMES OF CORONA
LET'S FACE IT
YOURS GEEKLY
LIFE IS TOUGH
BAKKAR. CHAI. SUTTA
STOLEN DIARIES