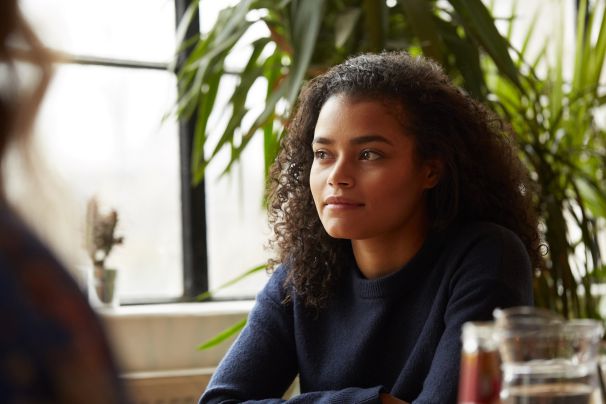 I was in the 5th standard when a new English teacher joined our school. I was charmed by her dusky skin, long hair, lovely eyes and beautiful nails. She always coloured them with light coloured nail paint.

Within a few weeks, she became my favourite teacher and I became her favourite student.

I would always wait for her lessons to begin. Even today, I can clearly remember how well she taught in class. I can never forget her voice. It was such a pleasure to learn something new in her classes every day. I would always do my English homework and she appreciated me every time I answered in the class. I was the first person to raise my hand whenever we had a reading session. I followed all her instructions.

She told us that we should always speak in English. I did so.

I spoke only in English even when I was at home. I never befriended my neighbours who did not know how to speak English.

She then told us to think in English. I changed my thinking pattern and focussed on what my teacher said.

I was overwhelmed with happiness when she became our class teacher the next year. I would help her in every possible manner. She too loved me a lot. I scored good marks in all my exams. But I never got the first position. There was a girl in our class who was far ahead of the class. She always secured the first position in the class.

Unfortunately, I did not get any of these positions that year. I went to my father with a heavy heart. He patted me on my back and said that it did not matter. He said I would experience better luck the next time.

I was declared the ‘Best Student Of The Class’. But I wasn’t very happy with this because this was just an award given to students who were not toppers. But I did go and congratulate my friend, the Principal's son, for securing a good position. I then went to my class teacher and got my report card from her. I noticed that I had got the 6th rank this time. I was a little disappointed to see this.

The new academic session started soon enough. My favourite teacher was my class teacher again. I worked harder and started regaining my confidence. I got good marks. Again, I managed to secure one of the top positions in the exams. I was appreciated by her. I was learning something new so I regained my happy-go-lucky attitude. A year later, again it was time for the final exam results to be declared.

I now had mixed feelings about myself. I wondered whether I would secure a good position this time at least. But the same thing happened again.

I had to console myself with the ‘Best Student Of The Class’ award while my friend, the Principal’s son, had managed to secure one of the top positions in the class. My parents assumed that this had happened again because I had not studied the full syllabus before appearing for the final exams. They thought that maybe that was the reason I had failed to secure a topper’s position again. I knew this was not the case.

I went to the Principal and asked if I could see my papers. I was told that this was not possible. So I just decided to leave it at that and move on.

My passion for English increased the next year and the entire credit goes to my English teacher. I started reading all the books that my teacher suggested and I even wrote poems for magazines.

But I was not crying because somehow I felt happy for her.

I asked her if she had finished all her packing. She said she had packed everything except her utensils because she still needed them to cook her lunch for Sunday. She said she would pack her utensils after she packed some food for her journey. I went home and asked my parents if we could invite her to our house for lunch on Sunday. My parents agreed and my dad immediately went to my English teacher’s house to invite her. I was helping my mother in the kitchen on Sunday morning when my favourite teacher came home draped in a beautiful saree.

I was going to meet her for the last time that day but she looked like a Goddess to me.

Suddenly she burst into tears and started sobbing. My parents tried to console her but she could not control her tears now. She wanted to leave our place but we somehow stopped her. She said that she wanted to confess something before she had her lunch.

She was my Goddess. I did not understand why she needed to confess to us. In my eyes, she could never do anything wrong. Yet here she was, saying she wanted to make a CONFESSION!

She said that she had to change my marks in the final exam mark sheet because the Principal had wanted his son to get some position. Tears rolled from my eyes. I went to my room and cried my heart out. I did not come out to bid her goodbye.

I had been cheated by my Goddess. I felt as I had been stabbed in my back.

I remember that later on, she had even come to my room to apologize to me. But I simply could not respond to her. I cried for a long while and finally fell asleep.

When I woke up in the evening, my dad tried to explain things from her perspective to me. He said that she was the sole breadwinner of her family. She was a single woman living 2000 kilometres away from her home. She could not afford to leave her job. She did not have any other option but to obey her employer. She had no other choice in the matter, so she had to change my marks.

My parents told me that she had opted to disclose the truth to us. She could have easily kept quiet about it and we would never have known about it.

But my tender mind could never understand these things. I was shattered and disheartened. I went on to pursue my Honours and Master's degree in English.

I do think of my Goddess very often. The pain has mitigated over time. I am presently an English teacher so I am able to understand her predicament. But I have made a promise to myself. No matter what the circumstances are; I will never ever tamper with the marks of any of my students.

Today, I can understand the guilt that my teacher must have felt every time she saw me.  I realize that she tried to compensate for it by being more loving to me and maybe also by ensuring I got the ‘Best Student Of The Class’ award.

I remember her telling in the class that the ‘Best Student Award’ was more meritorious than merely getting a position in the class. But I still think that had I not invited my Goddess for lunch that day, I would never have come to know the truth.

Sometimes the people we worship let us down very badly. But let us not forget that at the end of the day all of us are ordinary human beings. Dealing with unfairness is definitely not cake walk. The pain is intense and lingers for a lifetime but we do learn something worthwhile from other people’s mistakes too. Let us share this story and hope that this young woman is finally able to forgive her teacher.

HOW'S THE JOSH
LET'S FACE IT
YOURS GEEKLY
Your Stories
LIFE IN THE TIMES OF CORONA
BAKKAR. CHAI. SUTTA