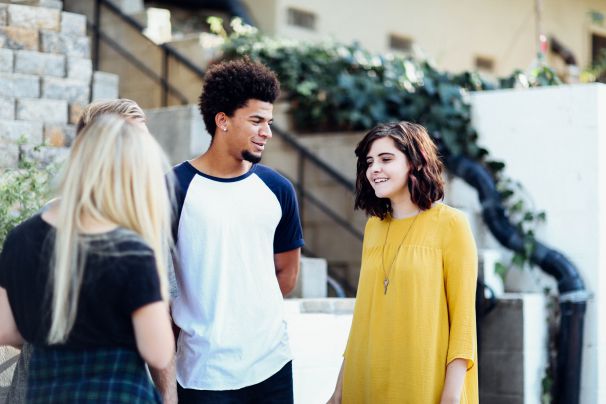 Every language has its own, ‘give away’ words. All French teachers encourage their students to take advantage of these terms. In French, one can figure out the meaning of a lot of words by observing their spellings. These words, are called, ‘vrais amis’ or, true friends; for example, une table means a table, un professor means a professor but on the other hand, there are those words that look alike, but have a completely different meaning, for example, blesser doesn’t mean to bless, it means to hurt while attendre doesn’t mean to attend to, it means, to wait for. These, we call, ‘faux amis’ or, fake friends.

Similarly, in our day to day life, we come across some people who claim to be our real friends but in reality, they are our enemies, disguised scoundrels.

Pallavi (name changed), is a dear friend who shared a personal incident from her life, one that has been bothering her for some time now, to the extent that when she shared this story with me, she burst into tears. Her story reminded me instantly of these French phrases, ‘vrais amis’ and ‘faux amis’.

I’m sharing this story here, with your permission, because it’s important to understand and pick out the ‘faux amis’ in your life.

This is what she shared with me:

Pallavi has been married for over a decade now, but she still reminisces about the day she married her husband, Rishi. She says she was raised and trained to understand that marriage is a package deal; you can’t accept your husband’s family as your own but you also accept his friends as your own. They spent a fair amount of time partying and vacationing, slowly, her husband's friends became his friends and she found herself spending less and less time with her own circle.

During one particular occasion, her husband was along with a close friend, one conversation led to another. Rishi then went on to share some very personal details about his life, including bedroom secrets, to this close friend. He thought that this conversation would stay private and between the two of them only.

But guess what, the next time the group met, Pallavi and Rishi had become the biggest joke. Everything that Rishi had shared with this friend of his, had now become dirty jokes amongst the group. Pallavi and Rishi were painfully embarrassed and begged them to let their secrets be just that and let go of all of this. But nothing worked.

So, were these ‘vrais amis’ or ‘faux amis’? Pallavi continued that she had been brought up to believe that loyalty and dignity is what hold a person up. This painful incident has made her sit up and examine her friend circle: the vrais ones and the faux ones. She learned the hard way, that not all friends are there to make your life a good one.

When she shared her experience with me, I felt her pain and her constant embarrassment, at just the thought of that incident. I was enraged.

Women are always belittled in this fashion; I couldn’t stop myself and that’s when I realized that I wanted to share her story with the world. Why? Because many women enjoy sharing their bedroom secrets too. Privacy needs to be respected. Women, need to be respected.

I wanted to take the role of a reporter in this situation here because this is a life lesson that everyone needs to discuss and understand. From conversations with friends, I understood that a lot of men and women refused to take the blame for sharing their secrets, their “friends forced them” to do so. And it isn’t surprising to find out that many of them have also indulged in jokes at the expense of others.

It makes me question myself, that being ‘well educated’ men and women from good families aren’t enough. If we don’t respect our own privacy, then we don’t stand much of a chance when our children complain about eve-teasing, bullying or even rape.

As a society, we need to evolve. We need to rise above our need for faux amis and remove them from our lives.

Share this story, because it's time to identify the friends that are good for you and the ones that are merely using you for their entertainment.